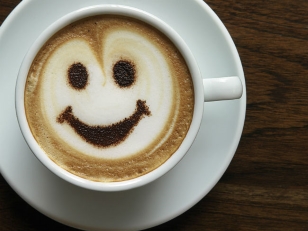 According to new research from Harvard’s School of Public Health, coffee can reduce suicide by 50% for men and women.  I guess it would only make sense considering coffee contains a substantial amount of caffeine.  According to Wikipedia, in humans caffeine acts as a central nervous system stimulant, temporarily warding off drowsiness and restoring alertness. It is the world’s most widely consumed psychoactive drug, but unlike many other psychoactive substances, it is legal and unregulated in nearly all parts of the world. Beverages containing caffeine, such as coffee, tea, soft drinks, and energy drinks, enjoy great popularity. In North America, 90% of adults consume caffeine daily.  Previous studies have confirmed that caffeine reduces depression as well.  Considering there is a direct correlation in depression and suicide, one could conclude that caffeine could reduce the rate of suicide.

In the new study, researchers examined data on 43,599 men enrolled in the Health Professionals Follow-Up Study (HPFS) (1988–2008), 73,820 women in the Nurses’ Health Study (NHS) (1992–2008), and 91,005 women in the Nurses’ Health Study II (NHSII) (1993–2007). Caffeine, coffee, and decaffeinated coffee intake was assessed every four years by questionnaires. Caffeine consumption was calculated from coffee and other sources, including tea, caffeinated soft drinks, and chocolate. However, coffee was the major caffeine source — 80 percent for NHS, 71 percent for NHS II, and 79 percent for HPFS. Among the participants in the three studies, there were 277 deaths from suicide.

In spite of the findings, the authors do not recommend that depressed adults increase caffeine consumption, because most individuals adjust their caffeine intake to an optimal level for them and an increase could result in unpleasant side effects. “Overall, our results suggest that there is little further benefit for consumption above two to three cups/day or 400 mg of caffeine/day,” the authors wrote.

It has been a while since I have tackled this subject. However, this morning the Psychiatrist in me woke-up.Suicide is still a major problem in our society. We have to continue having very open and straight forward discussions. The Monster Called Suicide. As you may or may not recall suicide was the 11th leading cause of death in 2008 and the 10th leading cause of death in 2009. We have to began looking at this medical dilemma with more seriousness in all of our communities.

Realizing that this is not a popular topic, I will try to be as direct, as well as, empathetic as possible.

Some of the risk factors that I have seen in private practice for suicide are;

I take a different approach to handling my depressed patients than many of my, colleagues. For example, I use the bio-psycho-social-spiritual model. I guess this would be a good time to break-down my clinical process.

Biological (Bio)-I take a very good family history to see if there is possibly a biological component to the patient’s disease. Most times, there is evidence for this factor. A mother, father, grandmother or other also have mental illness. It is very important to illicit this information because when there is a biological component-the disease may be a little harder to treat.

Psycho-dynamic (Psycho)-What are some of the causative and dynamic stressors on the ego. For example is there a history of physical or sexual trauma? Is there current spousal abuse? Are we dealing with chronic issues of abandonment? All of these issues must be addressed. Understanding the psycho-dynamics of a patient is very important in the assessment of depression and risk for suicidality.

Social-What type of support does the patient have at the time of assessment? Is the patient isolated although living in the home with others? Are they a part of the neighborhood or any social clubs? When stressed, is it all maintained inside or do they have social interactions that may provide temporarily relief before the availability of a licensed or professional mental health caregiver? This is very important also in the initial work-up and assessment of a depressed and or suicidal patient.

Spiritual-I often times pray that there is a faith system of some sort around. This can make the treatment plan a little more hearty. Being able to meditate, pray and call on a higher being is very important in our cultures. Many patients are surprised to hear that I validate their beliefs and actually encourage a spiritual relationship. After all, when the illness is very serious, all hands need to be on deck.

I hope that helps you understand my theoretical framework a little better. Now let me ask you a couple of questions;

Take a Peak at the Video below:

The problem of suicide has really become a problem in our schools and I would like for you to view the video,share with others and give me some feedback.

Yes boys, and girls suicide is a very serious problem in all of our communities, schools and even churches. It is now time for you to take action and began speaking out against this issue. Let someone know that there is HOPE and that there is HELP.

Questions for Review? True or False