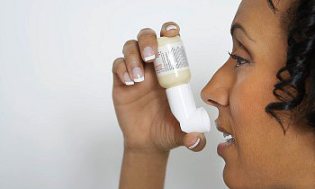 Experiencing racism can have a lot of side effects such as depression, self-consciousness and lack of trust, but does it now have the power to cause physical side effects as well? According to Boston University Medical Campus, a new study the  Slone Epidemiology Center (SEC) at Boston University, revealed that Black women who encountered frequent racism were more likely to develop “adult-onset asthma” than women who suffered from less racism in their lives.

A change in the weather, dust or over-exerting themselves, doesn’t always start an asthmatic to go into distress; sometimes its just plan stress that gets them worked up. The stress of a  life-time of discrimination and inequality can build up over time and eventually effect the person in some way and this new study proves just that.

The BUMC reported that 142 women were studied from 1997-2011 on the matter and completed health surveys, in addition to documenting their encounters with racism.

The results indicate that as experiences of everyday and lifetime racism increased, the incidence of adult-onset asthma also rose, up to a 45 percent increase in women in the highest compared to the lowest category of the racism measures. Furthermore, the incidence of asthma was increased even more in women who were in the highest category of everyday racism in both 1997 and 2009, and who may have had more consistent experiences of racism over time.

Interesting. So those chest pains you’ve been having for years and the on again-off again wheezing may just be pent up racism stress.

Do you agree with this readers? Do you believe racism can affect a person to this extent?