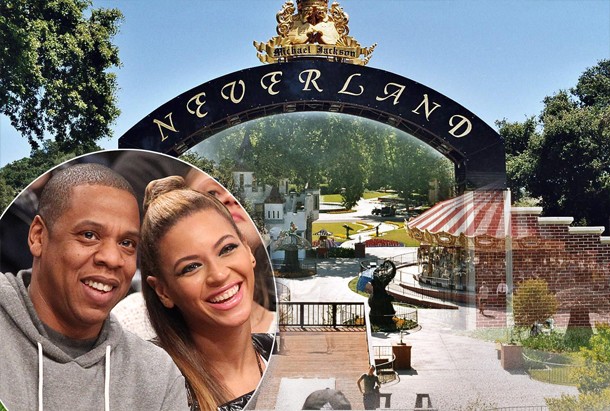 Jay Z and Beyoncé are the most looked upon celebrity couples; they usually keep a very low profile on their relationship and their personal life. However, allegedly a source believes that Jay Z and Beyoncé want to purchase Neverland Ranch? The two allegedly went an exclusive tour of Michael Jackson’s 2,700 acre southern California Ranch! The couple could be interested in buying the land, but allegedly the family isn’t enthusiastic about the thought of them buying to people outside the family or even taking a tour of the estate. Thomas Barrack Jr. the manager of the estate will do what he will. The NY post says the kids get a bit disturbed when they hear reports of someone purchasing their old home. “Good for the Jackson kids” Jay Z said he’s not interested in buying. But the family isn’t convinced in the least bit “If Barrack to them to the Ranch himself…There has got to be something to it”, a family member said Friday.

Nevertheless the family doesn’t have much say in the way the property is dealt with especially since Jackson defaulted on payments in 2008. Court papers state that Jackson still owns 85 percent of Never land Ranch. Who do you think should have control of the notorious Never land ranch? Many believe that if Jay Z and Beyoncé were to purchase the ranch it would be a symbol of just how much power they currently have however other Harry Belafonte followers might think that this is just another way that they spend their money carelessly on things they really don’t need. Do you think that most celebrities spend too much money on things they don’t need? An even bigger question would be would you buy a big house on a hill if you had the status and money of Jay Z and Beyoncé? Now that is the true question of the day.