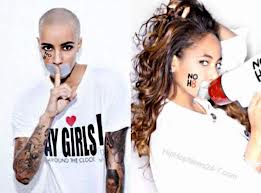 Normally,  actress Raven-Symone keeps her personal life private, but she has finally spoken out about her sexuality. After months of people speculating, Raven spills the beans to twitter. “I can finally get married!” she tweeted. “Yay government! So proud of you!” This tweet coming just a month after the Supreme Court overturned the Defense of Marriage Act. This means that the government now recognizes same-sex marriages. Rhode Island and Minnesota legalized same-sex marriage earlier this week.

The rumor mill has linked Raven to model Az Marie Livingston. Livingston found fame after competing on America’s Next Top Model: British Invasion. In the past when asked about her sexuality and relationship, Raven issued this statement, “I’m not one, in my 25 year career, to disclose who I’m dating and I shall not start now. My orientation is mine, and the person I’m dating to know. I’m not one for a public display of my personal life.” She seems to have had a change of heart.

Although she still not said whether she is dating Az Marie or not, but this step is monumental for her. According to The Huffington Post, Raven had this to say to E News! “I am very happy that gay marriage is opening up around the country and is being accepted. I was excited to hear today that more states legalized gay marriage. I, however am not currently getting married, but it is great to know I can now, should I wish to.”