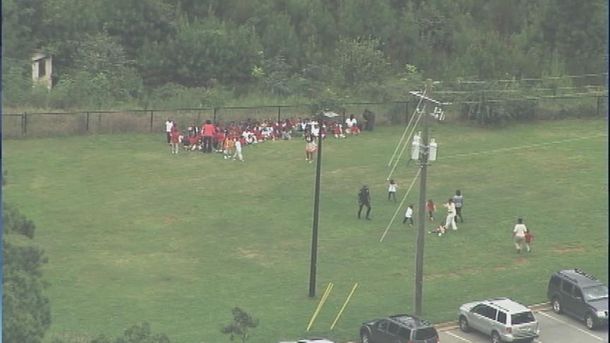 Shots fired at McNair Elementary in DeKalb County! Channel 2 Action News has confirmed that one person is in custody after shots were fired at a DeKalb County elementary school. The DeKalb County school board chairman said a there was an active shooter at Ronald E. McNair Discovery Learning Academy. Chairman Melvin Johnson said there have been reports of shots fired. There are no reports of injuries. News Chopper 2 footage showed children running from the school building. The charter school is located on 2nd Avenue in Decatur. Someone in the school office called Channel 2 Action News to report that there was a shooter in the school. The person told a Channel 2 assignment desk editor that the gunman asked to call WSB-TV. Shots could be heard over the call. What has the world come to where innocence is being attacked? Innocence Freedom from sin, or moral wrong. Children who don’t fully understand the circle of life are now becoming too close to having their lives taken from them! This is now becoming a epidemic where people are attacking our future police officers before they can swoop them off the street. Our future teachers and even our future could be presidents! This is a shock and a outrage to know that so many people have so much malice and hate in their heart where they want o go after the children who honestly have not done anything to anyone! There are a couple different types of people who have the want to kill…. Chronically Aggressive Individuals, the Over-Controlled Hostility Type, the Hurt and Resentful, the Traumatized, the Obsessive, the Paranoid, the Insane, the Just Plain Bad & Angry! All we can really do is pray and hope this madness stop and these people open their eyes to this devilish work!