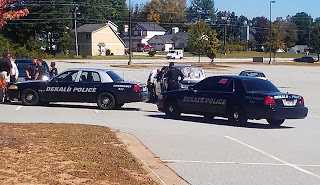 I contemplated for some time now on whether to post this video clip recording police brutality in Dekalb County, Georgia. Without knowing the full story (which there are always TWO sides to a story) it is hard to come to a sound conclusion as to whether who was at fault in this situation.  But what I can comment on is the poor behavior of the team of police that responded to this particular incident.  All to frequently do we hear about individuals in law enforcement roles abusing their authority.  Many incidents involve corruption, physical abuse, verbal abuse, sex scandals, extortion, and the list goes on.

I am not clear on Police procedures and protocol.  But I can imagine it may be time for them to reevaluate their techniques.  Proper training and education on how to properly capture and arrest a criminal could prevent such incidents from occurring in the future. It is imperative that as a society we address these issues so that we can continue to progress and not regress.  But, what is clear to me, is that these particular officers used excessive force and poor communication skills when attempting to make this arrest.  The amount of police officers that were used to arrest one female civilian was outrageous to me. I can also look at it in the perspective of the officers of never knowing what type of situations they may be exposed to when entering someones home.

After doing an analysis, I can see a few things happening in the future;

After a while, if we don’t get a handle on some of this stuff, America will be in even more trouble.  I fear the police but not because I am breaking any laws, I just fear “police brutality.” It just appears that the further America goes forward, the more she moves backwards.  Do you feel like police brutality is getting out of control? Do you believe that after while a Civil War could start here in America?  Are you tired of the many videos and blog post revealing this issue?  Have you been a victim of racial profiling or behaviors that made you less than comfortable?  All I can say is “Hands Up!”

I am hoping that some of you will share your thoughts on this issue.  It is important that we began dialogue and discussion about this serious issue.