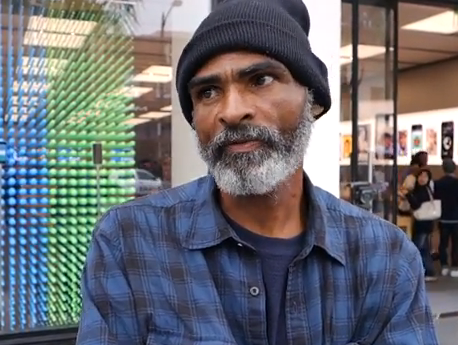 We all know when some new technology come out people do some crazy things. Hire a homeless line holder for your IPhone 5?!? A homeless man in Pasadena, California felt like he had a great deal. Reportedly, the homeless man told Rich DeMuro of KTLA that a business man approached a group of 100 homeless people, offering to pay them each $40 to secure two phones on his behalf. He also promised he’d buy them pizza, soda and cigarettes. Each person waiting on line for the new iPhone is only allowed to purchase two devices. The business man hoped to acquire 200 phones by organizing this arrangement.

Many throw out the question of is this right or wrong? On one hand they look at it as they are getting money and food for standing in line where is the harm done?  Others say it’s an outrage for two reasons. One these are human beings and should not be a part of no one scams for money or food. Why not just help get them jobs? There are many jobs such as junkyard, garbage men, lawn work, and even construction why not help them get jobs such as those rather than use them as a part of a scam.  However, who can really say something about it other than apple officials because these people actually go, stand in line, buy the phones, and leave. No harm done right? No although some people are homeless you must take into account that these are somebodies mothers, fathers, or even grandparents. They are still human beings and it’s degrading to go stand in line for these iPhone’s for this man to give you enough money to buy two. However he gets the phones therefore the profit and they get the $40, pizza, soda, and cigarettes. How do you as a reader feel is this good or bad?