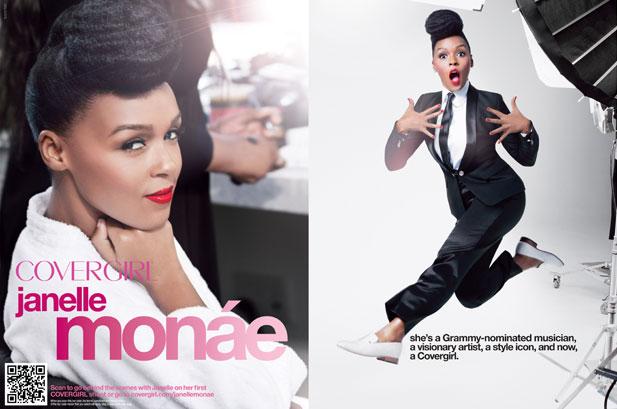 Janelle Monae feels “nothing wrong with being Bi Sexual” Monae stopped by Sway in the Morning to talk about her new album, The Electric Lady. Tracy G changed the subject and told Monae, “I want to talk to you about boys.” She explained that men have said they felt like they wouldn’t have a chance with her. “They feel like you’re into girls, I don’t know where that rumor comes from,” she said. Monae smiled and said, “That’s great. That’s awesome. Women are amazing, and so are guys.”

The 27-year-old added: “There’s nothing wrong with being bisexual, there’s nothing wrong with being lesbian or gay. I am an advocate. I have friends who are in same sex relationships and I feel love has no sexual orientation. Love has no religious belief. Love is the purest and most important thing we can possess for ourselves and for others.”  Sway then asked if Monae dates men or women, but she declined to comment. “I keep my personal life very much to myself. I want everybody to focus on my music. I also don’t want to let anybody down,” she said. “I want women to still be attracted to me. Go get my album! I want men to still be attracted to me so I have to be political in this. I can’t really tell y’all!” Monae added, “I will say that I’m such an advocate for love. I think you should be able to love freely whoever you want.” Janelle Monae released her second album, The Electric Lady, on September 10.She did not directly address her sexuality she expressed how she feels about same sex or traditional sex. Who cares what her sexuality is her music and sound over clouds what anyone opinion of her is. You cannot deny her talent I say keep on pressing on!