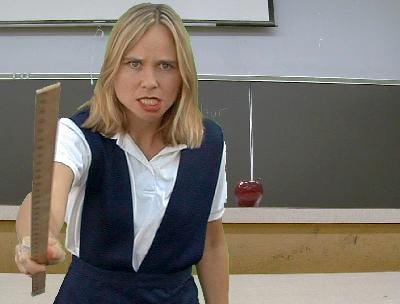 So you just got home from work, have  thrown your shoes in the corner and are about to start dinner when your child greets you and says “My teacher hit me”. You do a double take and say “what”? but you know you already heard what you just heard. Que the impromptu parent teacher conference with you in your hair rollers and bathrobe first thing in the morning.

Getting in trouble at school conjures different consequences at home for most people. Maybe you remember getting silent lunch for a day for passing a note in class. Or maybe you lost recess for a few days for talking and interrupting the teacher or the downfall that many fall prey to, low grades. Depending upon the parenting style, the consequences for all that could range from no dessert to a butt whuppin but to each his own. So what if the teacher is actually the one in trouble?

According to The Kansas City Star, a young mother, soon to be 25, attacked her kid’s kindergarten teacher after he told her that the teacher hit him. Now back in the day, people didn’t mind teachers using physical discipline to keep kids in line but people don’t take too kindly to that in this era.

As reported by The Kansas City Star:

She ran behind the desk where the teacher was seated and hit her five to 10 times in the face while holding the teacher’s arm to her side, according to the police report. She then grabbed the teacher by her hair, pulled her out of her chair and slammed her head against a file cabinet twice before running out of the classroom and leaving the building.

BUT WAIT….the son LIED!
The boy told his mother that the teacher had scratched him after she disciplined him earlier that that but as it turns out, that was not how it went down. So with gun jumped,  the teacher got senseless beating for nothing and assault charges were won by the mother.
The incident is under investigation.
Even if proof comes up that the teacher did scratch the boy, did she deserve the retaliation from the mother? Should it have been worse? Did the mom over-react? Would a mother over 25 have acted in the same manner?
Dr. O
Picture source: http://cardonationsforkids.wordpress.com/2011/02/23/educating-children-in-america-whos-to-blame/