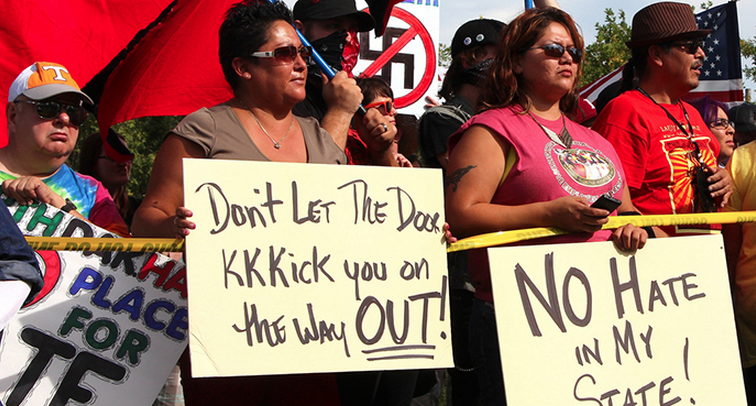 North Dakota vs. Whites Only community! A tranquil town in North Dakota could lose its serenity if one man has his way. Paul Craig Cobb wants to transform Leith, population 24, into a community that mirrors his white [only] views. This weekend, white and others are expected to descend on the town in a show of support for him. Cobb said he envisions Leith as a place where white nationalist banners will be flown, where white culture would be celebrated, and where minorities would not be welcome. Cobb said he wants this movement to spread to other communities, other nations, even around the world, though he does not explain how he would do this. “I don’t understand why all the different other people don’t say ‘whitey’ is pretty darn nice and clever,” Cobb said. “There are many organizations (in) which whites have to support other cultures… Where is the organization of people from around the world that says let’s keep these white people?”

They stood outside a meeting hosted by Jeff Schoep, head of the white supremacist National Socialist Movement, chanting, “No hate in our state!”. “This is not a one-time, one-day thing,” a protester said. “We will be here again and again until you are gone.” Craig Cobb, the white supremacist who has bought up a dozen properties in the town, population 24, said he wasn’t concerned about the protesters. “They’re loud, so what? They’re literally not human to me.” A Nazi flag stood outside the meeting, which featured a supremacist bagpiper and was held at City Hall. But Cobb could face hurdles in very different legal arenas. Health officials may condemn his property because of a code-violating outdoor toilet, and a law professor notes that the Civil Rights Acts of 1964 and 1968 could squash his all-white plans. Town residents are considering another extreme way to stop him: dissolving the town and giving up control to the county. For his part, Cobb says there is one thing that could drive him away: If officials “send four dozen Somali families to Leith.