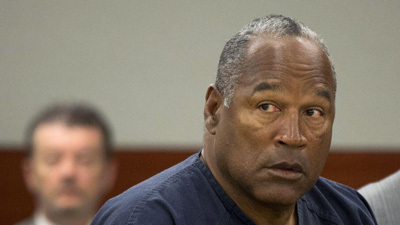 OJ Simpson “stop right there” stealing cookies The former football star is currently serving a 33-year prison sentence for armed robbery, and he apparently has a pretty big sweet tooth. Simpson was recently caught stealing cookies from the chow line by guards in the Nevada prison, the Daily Mail reports. Guards reportedly saw Simpson trying to hide something underneath his prison clothes as he walked back to his cell after lunch one day and, after further investigation, found that the former USC standout had a stash of “more than a dozen oatmeal cookies,” which were taken away. A source told the National Enquirer that Simpson didn’t seem contrite about his actions. Allegedly, Doctors had previously warned Simpson, who is looking noticeably tubby, to ease up on the fat and sugar laden foods and start exercising more because he suffers severe diabetes. Reportedly, at first, his fellow prisoners thought he had smuggled in a cell phone or some other banned item. ‘So when the guard started pulling cookies out of O.J.’s shirt, the other inmates started laughing so hard they nearly fell over,’ the insider added. The guard could have written up Simpson for the attempted cookie smuggles but he reportedly decided to let him off with a warning.

The source said theta while Simpson was embarrassed; eating his favorite foods is the only enjoyment he has left. You really have to appreciate how things have come full circle for the Juice. OJ cracking up the entire prison population getting busted sneaking cookies in his jumpsuit likes a slapstick movie character. It’s like Naked Gun all over again. Guard probably shook his head like, “Oh, that rascally OJ always up to something!”  It’s almost a shame OJ’s…situation…didn’t happen until later. The world today is much different than it was in ’94. These days all he’d need is an apology tour on TV and a reality show about redemption and nobody would even remember whose throats he slit in the first place.