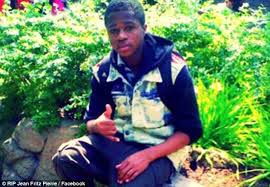 “Teacher called to say child was skipping class”  …“My son is dead”   Reportedly, Jonas Pierre, who this month filed a notice of claim for two $5 million suits against the city over the 16-year-old’s death, said staff from Prospect Heights International High School called him to set up a meeting to discuss his son’s awful attendance record. The distraught dad said the school’s insensitive phone call broke his heart again just as he began to recover from the greatest loss any parent could ever experience. “I think, why are you calling, why are you telling me this,” said Pierre. “Don’t you know my son is dead?”Pierre, 39, a retail worker, shared a humble Flatbush walkup with his beloved only son until the teen’s untimely death. “Maybe the school doesn’t think it’s important, but it’s important to me,” he said. “I don’t think I could ever get another son like him.”

The doomed freshman was one of 48 students on a field trip to Rockland County’s Bear Mountain State Park. The trip, intended to be a joyous celebration of the school year’s end, turned tragic when Jean Fritz and a friend left the group to cool down in Hessian Lake, where swimming is banned because of deep pits in the lake’s bottom. Park workers who spotted the teens called them four times to return to dry land, but it was too late — Jean Fritz disappeared under the water. After a 50-minute search, police discovered his body. Cops said the cause of death was accidental drowning. A probe by city investigators this week cleared school staffers in Jean Fritz’s death, but Pierre blames the school all the same.  “We apologize for any pain or suffering this may have caused the family and are checking all data systems to ensure that the family doesn’t receive these calls anymore,” said agency spokeswoman Erin Hughes. But attorney Mark Rayo, who filed the suits on behalf of Pierre and his son, said the father hasn’t heard an apology from the city.