No doubt Minnesota Vikings star player, Adrian Peterson will be playing with a heavy heart. CNN has reported that his 2 year old son died as a result of injuries consistent with abuse. Sioux Falls, Minnesota  man, Joseph Robert Patterson called the police because he girlfriend’s child was choking. The child was unresponsive when the police arrived, so they rushed him to the hospital. Police discovered the child was severely injured and Patterson was the only person at the home at the time. Patterson, 27, was charged with aggravated assault of an infant and aggravated assault. If convicted, he could face up to $80,000 in fine and 40 years in prison.

Shortly after the news was released, Peterson took to twitter to express himself. “I will ask you all to please just respect my privacy,” Peterson said, but he did show gratitude for everyone who reached out to him. “God Bless everyone and thank u so much,” he tweeted.

The victim’s mother is not being investigated, but Patterson was arrested and his bail was set at $750,000. 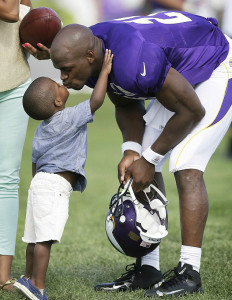 No parent wants to bury their child and everyone seems to feel sympathy for the death of such a young and innocent boy… and at the hand of the mother’s boyfriend?! It goes to show that you have to be careful who you allow to care for your children. When the child, whose name was never released, was still in critical condition, Peterson was still determined to play in Sunday’s game against the Panthers, but it’s unclear if he is continuing with those plans now. While he has requested privacy during this very difficult time, everyone must respect that and if you’re the praying type, now would be a good time to mention him and his family in yours.