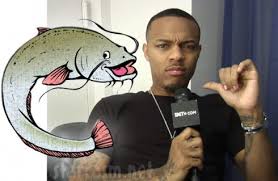 Bow Wow reacts to catfish episode about him! Recently on the show catfish Bow Wow was all in it and was actually never on the show. A young single mother thought she was in an online relationship with the rapper. The two “met” about four months ago on Facebook when Keyonnah “liked” Bow Wow’s fan page.

They started texting daily and then began planning their life together. He had even sent her $10,000 over the course of their relationship, which seemed like a positive sign that he was who he, said he was. Nevertheless, the show’s hosts Nev Schulman and Max Joseph dug a little deeper. And when Keyonnah and the guys headed to meet Bow Wow in Atlanta, they actually met Dee … who was a woman.  “So you kind of created the profile as a trap in a way to meet girls?” Max asked her. “Yeah to meet a lot of girls,” Dee said. “I know Bow Wow, he gets that attention. All the girls love him.”  Dee wasn’t even bothered that these girls who are into Bow Wow are most likely going to be straight. “For me, I like a challenge,” she said. According to Dee, she’d fooled a lot of women by dressing like a boy and wearing an accessory in bed. As for the $10,000, Dee borrowed that from her friends and family. Yet not a shocker, Keyonna wasn’t interested in continuing her relationship with Dee. But the story did get the real Bow Wow’s attention. He posted a video response on the website for his show, BET’s “106 & Park.” In the video, Bow Wow said, “I feel honored. It’s dope and it’s fly when someone wants to be you. And not only want they be you, in their mind they are you. That’s crazy. But I like it. It’s free promo  For myself.”