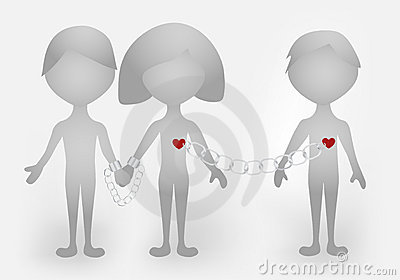 Love triangles vs Open relationships. A love triangle (also called a romantic love triangle or a romance triangle) is usually a romantic relationship involving three people. While it can refer to two people independently romantically linked with a third, it usually implies that each of the three people has some kind of relationship to the other two. The relationships can be friendships, romantic, or familial. One person typically ends up feeling betrayed at some point, Person A is jealous of person C who is having a relationship with person B who, in person A’s eyes, is “his” person. Many people want to have their cake and eat it as well. They make a bond with a person they are with, but they can’t control their lust to stop looking at the next guy/girl. That’s when we talk about the term open relationships.

You may love him/her, you really do, but sometimes you’d like some . . . variety. Or maybe you’d like to see or hear how someone else responds to your moves. It’s tough to suppress that natural “hunter” instinct. You’re not the only one playing video games well into the night to get that chick at the office out of your head. With about 50% of marriages ending in divorce, many reporting infidelity as the reason, some couples are challenging the boundaries of traditional relationships in order to keep the spark. Don’t ask don’t tell theory is becoming oh too popular! Being in a committed relationship often shows one’s ability to have control of the mind. Some people blame it on not being mature and others may blame it on alcohol or drugs. The bottom line is if your felt you were too young not to cheat why put some one else through the headache and if alcohol and drugs made you cheat you and your “friend”, or whoever must have had a little more for each other on the inside. Love triangles or open relationship either is not showing faithfulness. But hey what do you think?