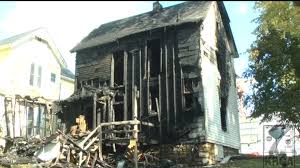 Man tazed 3 times trying to save his son from a burning building. Can you imagine knowing your child is in a building burning and the police are tazing you so you can’t go back in!

According to raw story –

Relatives say police officers used a stun gun repeatedly on a Missouri man to prevent him from going into his burning home to save his 3-year-old son.

Firefighters were called just after midnight Thursday to the fire in Louisiana, Missouri, after Ryan and Cathy Miller awoke to find smoke in the recreation room where they’d fallen asleep watching television.

They were able to escape through a rear door and call 911, but the boy, Riley Miller, was still in his bedroom.

Ryan Miller tried to go back into the burning building to rescue his stepson, but police officers shocked him with a taser three times to keep him from going inside.

The boy was later pronounced dead from injuries he suffered in the fire, which investigators said was sparked by a faulty electrical circuit.

Family members said they were outraged by the officers’ actions.

“It’s just heartless. How could they be so heartless? And while they all just stood around and waited for the fire department, what kind of police officer wouldn’t try and save a 3-year-old burning in a house?” said sister-in-law Emily Miller.

Authorities said a firefighter in full protective gear tried to go inside, but the flames were too hot.

The boy was found near the doorway from his bedroom to the front living room, investigators said.

Another son was not home at the time of the fire.