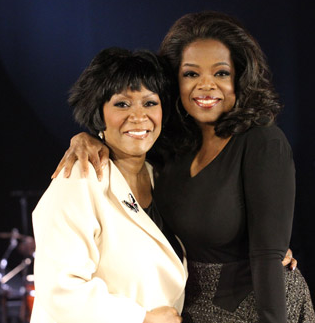 Patti Labelle speaks on Diana Ross beef! Patti LaBelle was the guest on Sunday night’s episode of Oprah’s Next Chapter. She regularly furrowed her brow at Oprah’s questions, often answering them with a side-eye and a “What!” It was, in short, everything you’d want it to be. Moreover, it was everything, period. The 69-year-old self-acknowledged living legend knows that she can not only get away with being perpetually crabby, but that she can look adorable in doing so. She talked about having her son as her manager (“Oh, that’s awful”), people who ask her to say hi to their friends and loved ones on their cell phones when they approach her in public (“I’m not speaking on your instrument”), her refusal to get her own cell phone (“Homie don’t play that”), and the fact that she will not be getting married ever again (“Congratulations, Tina darling, but Patti’s not gonna go there”).

When asked about what makes her happy, she said flowers, walking her shih tzu, and wading in her pool in a T-shirt and panties (well, she said “p…pants” and looked off camera nervously, and then clarified it as “short pants,” so I’m thinking she was too modest to say “panties”). “I’m not swimmin’,” reports Miss Patti.

And then, during the last moments of the interview, she cried, thereby covering the entire range of emotions we’d expect from a diva of her stature. Those tears didn’t stop her from getting in one more cranky-sounding barb. National treasure, this one.

By the way, she wasn’t promoting anything. She just sat down to shoot the ish on camera with her old friend Oprah. An added enjoyable aspect of this interview was watching Oprah in rare beta mode. The usual alpha personality type knew better than to try to strong arm Patti into anything, and if she didn’t, Patti’s death glares made that clear early on.