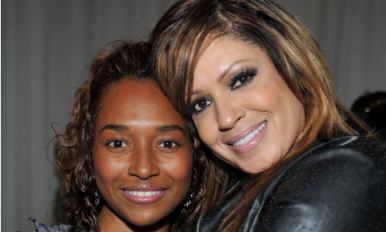 “A scrub is a guy that can’t get no love from me” or any girl who finds him unworthy according to TLC…BUT was L.A. Reid the scrub in the alleged infidelity rumors  between Rozanda Thomas aka “Chilli”, L.A. Reid’s ex-wife Pebbles and of course Mr. Reid himself? Of course all this mud slinging has come forth due to the success of the VH1 bioflick of the popular girl group, TLC.

In reality it’s been some 20 odd years since the events in the movie took place but there is always two sides to every story and some of those other individuals portrayed in the movie are not too happy about how some of the story was told in the film. One big “she said, she said” in this case was the acknowledgement of who or if Chilli was kicked out the group and the another popular topic of choice is whether or not Chilli and L.A. Reid really mixed business with pleasure.

In the video above, Pebbles believes they did! The former Mrs. Reid was very careful with  her word choice and refused to answer many questions fully but when asked directly whether or not she believes Chilli slept with her ex-husband, she said “yes”. Call it woman’s intuition, but apparently she just knew but didn’t want to believe it at the time. If you watched the movie, you may or may not have picked up some weird vibes between Chilli and Pebbles,  well between the characters during their interaction (I did) so maybe some sort of rift was being implied there who knows?

There seems to be some huge discrepancies between the validity of what really happened between the group and their former manager according to both parties. Both have addressed the issue of Chilli being kicked out the group and by who but Chilli has not chimed in on Pebbles’ most recent claims about her and her ex….yet. Judging by the Pebbles interview, it looks like she was prepared to let by gones be by gones; until the movie came out. Everyone has supposedly moved on from what was done in the past, so is this even relevant anymore? Does it matter?

With that being said, I’d like to pose a serious question to my readers; is it better to go to the grave with a secret you think would cause harm or expose it no matter what the cost?