I can taste it now, moist turkey stuffed with cornbread dressing, macaroni with at least three types of cheeses, broccoli casserole, potato salad and for dessert, a slice of sweet potato pie topped with a dollop of whipped cream. I’m salivating like Pavlov’s dog at just the thought of my Thanksgiving dinner with my family and friends.

Thanksgiving is the one holiday that isn’t driven by gift giving or receiving. Traditionally, this holiday is sacred to families because it is a day when loved ones from all over convene together to watch football and enjoy good food and even better conversation. Imagine my frustration when I received a call from my nephew in college telling me that he won’t be at dinner this year because he has to work…at the mall. Stores usually open at midnight on Black Friday, so initially I thought he was lying until I saw a Macy’s commercial confirming that they would indeed be opening their doors at 8pm on Thanksgiving day. It’s not just Macy’s. Belk and Kohl’s and other stores will be preparing for a holiday sale as well. 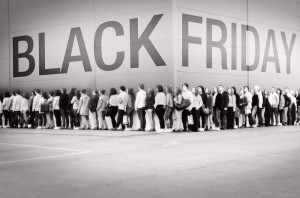 I don’t know about you, but at 8pm on Thanksgiving day, I had plans of waking up from a small food-induced coma and diving head first into a second plate of food, NOT SHOPPING. The truth of the matter is, the deals offered are not so great that they can’t wait a few more hours. In the past, my friends and I have made an adventure of it and after indulging in delectable delights and all the games had gone off, we would go to select retailers and get in the mile long lines in attempts to save an extra 20% on an HP laptop or get a 32 inch flat screen TV for $250.00. Now these deals are always attractive, but on Thanksgiving though?

I’m not the only one annoyed by the idea of stores opening their doors to patrons on turkey day. In fact, Facebook groups and online petitions (http://www.ipetitions.com/petition/door-buster-or-family-buster) have been circulating in attempts to get the attention of the powers at be. Now it may be too late this year, but perhaps next year Thanksgiving will stay untouched as a shopping day. Are you shopping after your holiday meal?