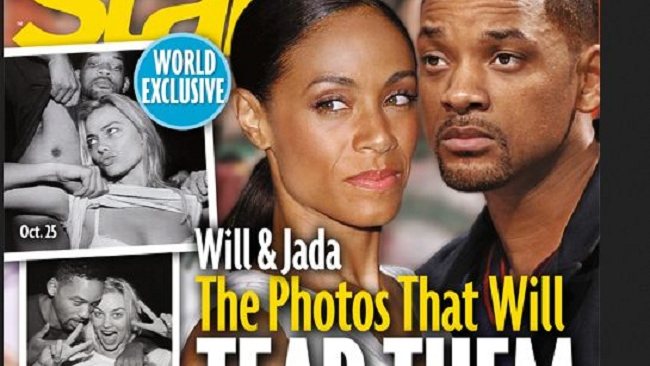 Is Will Smith sleeping with his co-star? Will Smith and his Focus co-star, beauty Margot Robbie, got too close at a New Orleans party last month and their sexy photo booth pictures that were meant to stay private.   According to a bombshell report from Star magazine, the Australian actress cuddled up with Jada Pinkett-Smith‘s hubby behind the curtain of the photo booth, suggestively lifting her shirt and exposing her bra, as Will lifted his and pressed his bare chest against her. “He wasn’t acting like a married man; he gave no signs that he was in a committed relationship,” an eyewitness of the scandalous scene told the magazine: “What kind of married man would go into a photo booth with a sexy 23-year-old girl and start to undress?” and Jada wasn’t present at the party held on Oct. 25, begging the question: Could this be the final straw in their already troubled marriage? Two days before the pictures leaked, Smith’s wife Jada Pinkett-Smith was pictured WITHOUT her wedding ring at an event at the Montage Hotel in Los Angeles (seen below), fueling rumors that their 15-year-marriage may be on the rocks. “When we did our audition together, we had a natural chemistry,” Will previously said of his co-star. “I think it’s going to be a lot of fun.” After weeks on the New Orleans set together the two got intimately close at the October party in question, the magazine claims.

“Once they pulled the curtain back to take the pictures, they let their inhibitions run wild, laughing, hugging and nuzzling each other in the dark,” the eyewitness said. “They were hanging all over each other, laughing like they were a new couple in love,” the source continued. “Will has just gotten done working for the day, so he definitely wasn’t intoxicated in any way — he knew what he was doing.” The scandalous couple didn’t wait for their photos to be printed and Will’s assistant later materialized and confiscated them, Star says. “Will and Margot never showed up back on set or attended the night’s festivities with the rest of the crew,” the insider revealed. “After they left the party, they were gone all night.”

What do you think…is Will cheating with co-star? That raggedy pic doesn’t look all that bad to me!