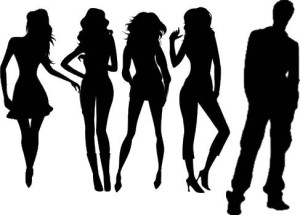 You look through your little black book; movies with Tina on Friday, Brunch with Stephanie on Sunday and happy hour with Dana on Wednesday.  It’s safe to say that your social life is thriving and it’s been a while since it has been this active. Three dates in less than a week? The stars must really be aligned in your favor. You’ve always been the relationship type. You were in a serious relationship for two years and when things ended, you just wanted to move on and focus on your career. But, it’s cuffing season. It’s cold outside and the holidays are approaching. Loneliness kicked in quickly. So, you ventured back into the dating world and like a baby calf, struggled to walk. After several awkward pick-up lines, a dozen rejections and a botched online dating profile, you found your confidence. You were now able to walk up to an attractive woman and tell her exactly what you want without your palms sweating or knees shaking. You’re proud of yourself and you should be.

In this age of social media where people would rather text or tweet than call, dating is more difficult than ever before, but like Smokey Robinson and the Miracles advised, “you better shop around.” Which brings up a good point, can you date more than one person at a time?

I have a friend who thinks it is the worst idea ever. I recall her saying, “you can’t fully invest in getting to know me if you’re spreading your time and attention between multiple women.” My rebuttal for that is simple, when dating several people at once, the objective is not to invest all of your time or attention. It’s like a dating show, auditions if you will. You’re trying to weed out the ones who won’t work for you so you can find the one you’re truly compatible with. Also, if you’re not looking for anything serious, what’s wrong with a few casual dates with a few different people? They say variety is the spice of life, right?

Now this is in no way an excuse to bed multiple partners. I said casually date, not casually lay. I’m specifically talking about nonsexual encounters. I think that as long as you keep the lines of communication open and honestly express what you want from the other person, there won’t be a problem. Some may be open to the idea and some may be totally against it, but you have to be honest about what it is that you are looking for and not only speak on what you think they want to hear. It’s important to express when those desires change. For example, if you want to become exclusive, say that. if you want to break it off, say that. No one like being the only person invested in courtship.

But what do you think? Can one successfully date multiple potential suitors at once or do you think that is just opening the door for broken hearts and hurt feelings?