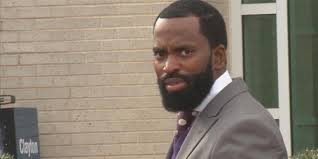 We’d like to think that our pastors are praying for us, not preying on us! It’s disheartening to think that the person that is supposed to watch over our soul is secretly damning his own with perversion, lies, promiscuity, adultery and whatever other commandment they choose to break. According to The Atlanta Journal-Constitution, a former  43 year old Atlanta pastor by the name of Craig Lamar Davis, was found guilty of knowingly exposing a woman to HIV. Luke 8:17 says For all that is secret will eventually be brought into the open, and everything that is concealed will be brought to light and made known to all. Maybe the man formerly known as Pastor Davis forgot about that particular scripture.

According to the AJC, Davis “sat motionless in a packed courtroom as the jury read guilty verdicts in two counts of reckless HIV, a felony punishable by up to 20 years in prison” but his sentencing won’t be until the end of next month (Feb. 21).  In case you didn’t know, knowing you’re infected with HIV/AIDS and not disclosing that information to your sexual partner(s)  is a serious crime, so Davis may be missing in action for a long time.

Yes, Davis was found guilty as he should have been but what does this say about his ministry and the women that slept with him? Are there more then the two reported? Are the other ministers and pastors displaying this same type of behavior? The church was meant to be hospital for the weak, distraught and spiritually ill individuals. You don’t expect to be worse off in the hospital then you were before you got there!  Stories like this should bring Believers to the conclusion that too many churches are infected. They malpractice the Word of God, use filthy instruments and unqualified staff.

Is this type of behavior happening in your place of worship? Where did the church go wrong here?