The Grammy Awards are arguably the most prestigious awards given to musicians. Last night the Staples Center in LA, California hosted the 56th annual show and the red carpet shined with your favorite singer and those you’ve never heard of all donned in couture creations from the top designers. Overall, the show was a high quality display of performance art from some of the best the music industry has to offer. After watching the broadcast, I extracted my top 5 moments from the show…and yes, they are in order.

Although she has toned down the color of her hair for a more conservative look, one thing that still remains edgy is her artistry. P!nk, equipped with her raspy tone, can sing her hard hitting rock songs aggressively or with the utmost vulnerability. Last night, she showed her physical strength in a cirque-de-soleil type performance, complete with swinging on ropes and aerial gymnastics…all while singing live. She recycled half of the performance from the American Music Awards, but it was still better than most of the things that happened at the Grammys. Well done P!nk! 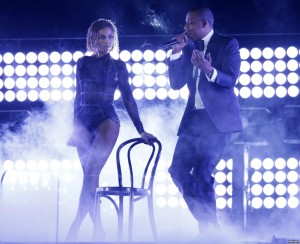 When people found out King B and Jay Z were opening up the show, they frantically looked for viewing parties to attend and many were genuinely excited to see the power couple take the stage together. Beyonce started in a chair and ended standing beside her husband who had a handful of the pop star’s bootylicious posterior. Beyonce is known for shutting shows down! Her performances are almost legendary and she sets the standard for greatness. Well, that was then and this is now and the 2014 performance of “Drunk in Love” was jaw-droppingly…adequate. I can hear the beehive stampeding towards me to stone for my speaking such blasphemy, but on the biggest night of music, Bey gave a performance that would have better suited an occasion like Saturday Night Live. The husband and wife duo are usually private about their personal life so it was nice to see them showing so much affection on stage, but the performance was mediocre, at best and over all, just anticlimactic.

It’s not often that an accessory gets a lot of attention, but Pharrell Williams’ hat did. It almost stole the show. He walked up several times to accept awards and even to performance in a Yosimiti Sam-esque hat. Social media immediately began to attack, playfully of course. Within minutes, @PharrellsHat had several twitter pages with thousands of followers. At one point, Arby’s even tweeted, “Hey @Pharrell, can we have our hat back? #grammys”. Skateboard P light-heartedly retweeted the question and responded with, “Y’all tryna start a roast beef?” Get it, “roast beef”? Ahh, who cares?

To say that stars were aligned in Macklemore and Ryan Lewis’s favor would be a huge understatement. The group walked away from the show with four Grammys, but the most controversial of the night was the one they won for Best Rap album. Many were shocked they won, including Macklemore himself who felt the honor should have gone to Kendrick Lamar. In fact, he posted a screenshot of a text he sent Kendrick telling him that he was “robbed” of the award. Noble gesture. Noble indeed.

Same sex marriage has been the center of controversy for quite some time and the Grammys were a big win for the LGBT community. In front of millions of people, those watching from the audience and those of us tuned in at home, 33 couples, both gay and straight got married. Queen Latifah officiated the ceremony and Macklemore and Ryan Lewis with Mary Lambert (Madonna later joined them on stage…for no apparent reason) sang their hit “Same Love”. Speaking of LGBT, has Queen Latifah officially came… no? Oh, ok.

Well there you have it folks. My top 5 major moments from the 56th annual Grammy Awards. What or who stood out to you?