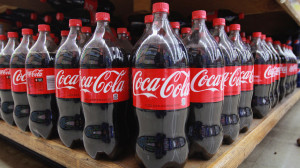 Coca-Cola, the major beverage company that provides us with some of our favorite soft drinks is catching some heat for a commercial aired during the Super Bowl. The commercial was 60 seconds of different people doing ordinary, everyday things while “America, the Beautiful” played in the background.

Now, this is where things took a turn for the worse, the song was sung in different languages. Does that offend you? Yeah, me either. Many people found it to be a problem and took to social media to express their disappointment with the commercial and the company.

According to the CBS Atlanta website, the Tri-County Congregational Church in St. Cloud, Minnesota posted this statement on their Facebook page, “Today we are throwing away all our Coca-Cola products and replacing them with Faygo. Faygo represents Christian values and follows the Constitution. Mexicans singing the National Anthem is an abomination.”

A Youtube user posted a comment on the site. “Multiculturalism has been turning American into a slum for the past 50 years, and the CEO of Coca Cola is Turkish so he doesn’t give a sh*t.” The user was referring to Turkish-American business man, Muhtar Kent, who is the CEO of the soda company.

Without a doubt, this was the most talked about Super Bowl commercial aired. With so much controversy, Coca-Cola had to respond…and they did. According to USNews.com, they released this statement, “the overall message of inclusion communicated by the ad reflects some of Coca-Cola’s most important values.

They took that message of inclusion further by allowing some of the children from the commercial to share their opinions. Leilani, who sings in Tagalog, says the ad will make people “feel really good in themselves … to hear it in many other languages spoken, especially if one of those languages is one that you speak, then it will really get deep inside of you.” Another child, Naya, who sings in Arabic, feels that, “We should always be friendly to each other, no matter what difference you have. When I sing the song, I feel really happy.”

America has often been called a “melting pot” because of its diversity. On any given day you can meet someone completely different from what you’re used to. It’s really quite pathetic that we are still having this problem in 2014. Do you think those who oppose to the commercial have a point?