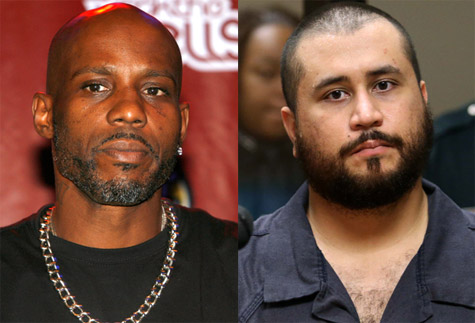 Now I know many of you probably can’t wait to see the pending celebrity throw down between George Zimmerman, the man acquitted for killing an unarmed 17 year-old Trayvon Martin, and troubled rapper DMX. First off, I’m disturbed that Zimmerman has been deemed a celebrity and to me is exploiting his acquittal. Second, while I truly and rightfully defend my opinion that Zimmerman should have done time for his crime, I’ m not so sure this is the best way to move on in his life. Let’s just say that if I was a gambling man, I wouldn’t put my money on an unarmed Zimmerman .

DMX however, is a different story. If you’re a DMX fan or know anything about the man, you probably know that his musical stylings are a bit rough riding around the edges and so is his personal life. He’s been documented as having a strained relationship with his family through Iyanla Fix My Life, in addition to drug use and anger management struggles. A bit mentally unstable in my opinion.

BUT, if I had to choose who would win in a street fight, I’d most likely pick Mr. X. A guaranteed noteworthy television event no doubt but here’s my problem, the Trayvon Martin murder and ruling outraged thousands of people in favor of Martin. So much so that Zimmerman received numerous death threats, negative press and an out-pour of angry citizens waiting for a chance to get even with him. According to The Huffington Post, 15, 000 people applied to be an opponent against Zimmerman, a number so large that the celebrity boxing organization had to hand pick DMX. That’s a lot of Zimmerman haters and with that many of them in a room, they just might get there revenge on him.

According to Huff Post, the rapper has not confirmed is definite participation in a fight against Zimmerman but DMX was not shy about his feelings either and given the chance told celebrity news source TMZ, “I am going to beat the living f**k out him … I am breaking every rule in boxing to make sure I f**k him right up”. Now I know the celebrity boxing match will probably be filled with police, snipers and any other authoritative figure they need to maintain order but there’s still a chance things could get out of hand or even spark an aftershock of bottled emotions from those impacted by the Zimmerman vs. Martin trial once the match is over.

Plus, is it just me or does this feel like a bit of a mockery against Trayvon and the rest of the Martin family? Put your feet in their shoes for a minute. Your unarmed teenage son was killed by a grown man with a gun. The man goes on trail and gets acquitted as if the your child’s life was taken in vain. Then less then a year later that same man is on TV deemed a celebrity (for killing your child) and fighting for all the marbles he can carry.

Will this send a mixed message to America? It’s Black history month so I’ll throw this one out there as a final thought. If a Black man, killed a white, armed intruder in self defense after wrestling with him in his home, would he be acquitted or thrown under the prison for 20 years?