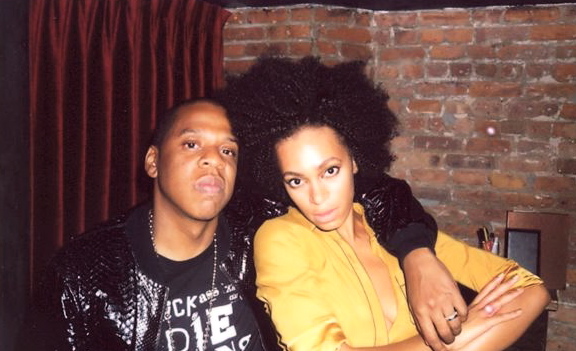 WHOA! Talk about a family feud! Leaked video footage (originally obtained by TMZ) which appears to feature three well-known celebrities, has been released to the public and it’s not pretty.  Elevator security footage shows four people in an elevator car who are alleged to be Beyonce, Jay-Z,  Solange Knowles and their body guard (unfortunately there is no sound, so we can’t even get voice recognition experts to verify but the people in the video sure do look like painstakingly familiar faces from the entertainment world LOL).

According to Daily News, it’s not exactly clear what caused the altercation, but sources believe it was sparked over something Jay-Z said and that Solange was fine and in “high spirits” at the Met Gala last week which is when the events took place. You can’t hear anything, so who knows what caused the alleged Solange to lose her cool but we can configure  that she is highly pissed at the alleged Jay-Z, thankfully the said 99 Problem singer did not strike her back and that Beyonce has probably never fought anyone a day in her life considering her stance in the footage.

Maybe the said Solange was tired of being the third wheel, who knows. I think we have all concluded that she can handle her own and is not to be messed with.

Can’t wait to hear the song and or lyrics that result from this.