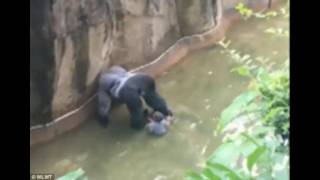 Toddler falls into gorilla pit in the video above.

Wait a minute, how did this even happen??

Here at Dr.O, we have heard it all, but a baby falling into a gorilla pit at the zoo is new to us! The horrifying and shocking incident occurred in a Cincinnati zoo where a 4-year old boy fell 15 feet down into a gorilla exhibit. In the pit were wild and endangered gorillas which range from 250 -400 pounds each. Watching the video, that starts right after the child lands, a 17-year old male Silverback gorilla hovers over him and then suddenly begins dragging him through the water violently. In other parts of the video, the animal appears to be helping him by straightening his clothes and standing him up. Reacting to the screaming  and panic from the crowd, he begins to drag him once again away to a more private area. Witnesses say they saw the animal throw the toddler into the wall. Others, argue the animal meant no harm. After roughly 10 minutes, zoo officials made the executive decision to kill the gorilla from afar.

As the video circulated, the media’s backlash to this incident was quick and scattered. Nonetheless, each opposing view has substance. Some have started angry protest arguing that the animal could have been tranquilized or that there were other methods instead of killing the already endangered species. The video shows how some animal rights organizations are speaking out against the Zoo. Zoologist and officials are backing the decision explaining that given the nature of this particular animal, the child could have lost his life in a second. The Zoo has admitted to remorse over loosing the animal and explains that  a tranquilizer would only irritate it more, sending the 400-pound male into a defensive mode. Some others, are accusing the mother and the Zoo of negligence. Further claiming, the mother shouldn’t have let her son lose, and the zoo should have the exhibit more secured.

The kid made it out the pit with a minor concussion and bruises.

We can all imagine how psychologically terrifying this can be for a 4-year old child and his mother. Accidents happen and we are happy that the child ended up being safe. Looking at the video, it is fair to assume the gorilla didn’t mean to hurt the child and could actually possibly have been trying to help. However, safety is first and the Zoo officials knew that species best.

What are your thoughts on this? Is this a case of negligent parenting or heroic zoology?  With recent videos surfacing of the animal protecting the child, could there have been other ways to handle this?

I urge you to visit http://www.mirror.co.uk/news/world-news/astonishing-new-footage-shows-gorilla-8082168 for more footage where the toddler falls into the Gorilla Pit to see where he is presumed to be protecting the child.

The mother made a public response shown below with some shared opinions. Best wishes to this family and the child. 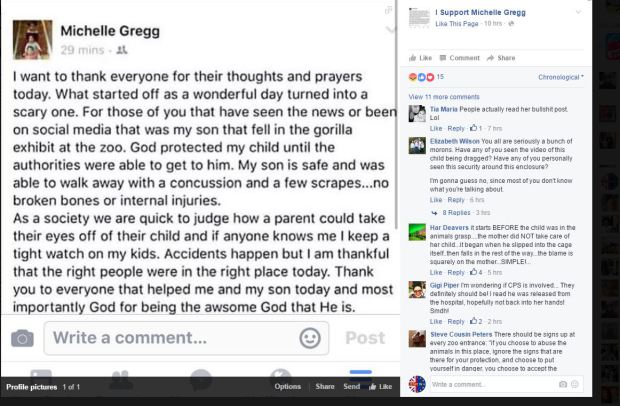