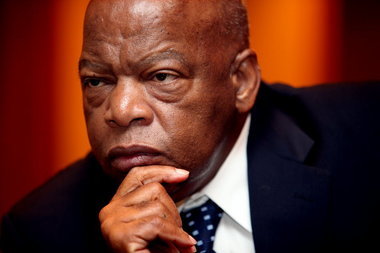 Congressman John Lewis Leads Sit-in! He is Shutting it Down!! OLD SCHOOL STYLE

The congressman and civil rights activist has made a stand against gun laws. He says is fed up and it is time to take a stand against poor gun control. Today, he along with other democrats sat down on the floor in the House of Representatives saying that they will not move until the House of Republicans push to secure better laws on gun legalities. About 40 democrats are sitting and standing on the floor awaiting a vote from the Speaker of the House. The house cannot operate divided so things cannot be done until the sit-in is resolved.

Lewis says that it is time for those in positions of power to stop turning away from what is wrong and demand action. He asserted,

President Barack Obama shows his support for the congressman’s courages act by tweeting “Thank you John Lewis for leading on gun violence where we need it most.”

Lewis and his followers are waiting for a constitution change switching gun possession polices from due process to secret lists. The secret lists process will mandate background checks and the other serious requirements for people to obtain guns.

This is an extreme step for congress as they are trying to stop the possibilities of terrorists getting guns and mass shootings like the unfortunate event in Orlando, FL.