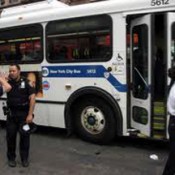 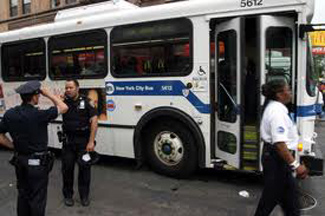 Now I don’t know how public transit systems operate much, nor their rules, but I bet this lady will think twice before lighting up in a confined area again. Last Thursday, a city bus driver allegedly pulled a Mike Tyson on an elderly woman for refusing to put out her cigarette, despite many passengers’ requests.

According to sources, the bus stopped in the middle of transit when passengers complained of the smoking woman. The MTA bus driver is shown approaching her before asking her to extinguish her cigarette or authorities will be called to remove her. Obviously she refuses, because what happens next is either a vigilant effort gone horribly wrong, or a bout of justice, depending on your ethics. The driver forcibly removes her from her seat and escorts her out the door, but the situation continues outside, resulting in what looks like him punching her in the face. For now, company officials are reviewing the footage to identify the bus driver shown during the video (see video below).

Now we don’t know EXACTLY what happened during the altercation outside, but, of course, citizens were outraged by the aggression shown by the driver. “He shouldn’t have put his hands on her like that. It was WAY too excessive,” says one viewer. But…was it?

This will have to be viewed as a matter of ethics, delving into a more professional feel than personal. Of course, the initial reaction shows that his excessive efforts were unnecessary, however, a driver has the right to ensure the safety of his route and bus. What if she fell asleep while smoking and caught the bus on fire? Or, what if there were customers who were allergic to cigarette smoke and developed respiratory problems?

I’m well aware that this woman could have been my mother, aunt, sister, etc. but the New York transit system strictly prohibits smoking on their buses. There are no exceptions to the rules, and if people are incessantly asking this woman to “put out the cigarette” and she refuses, perhaps justice was served…or maybe she’ll find other means of transportation in the future!