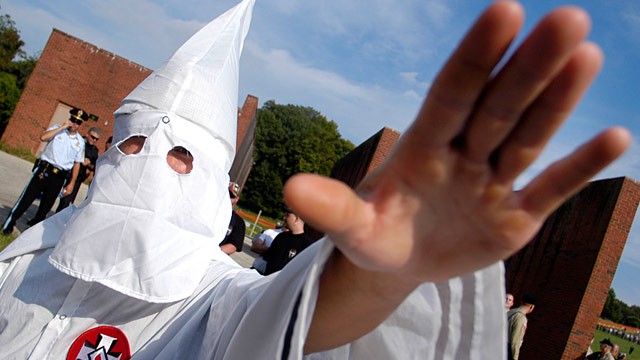 The adopt-a-highway program allows organizations to clean litter from the roadside of a highway.  Should just any group be granted the opportunity to do this?

In Georgia, an uproar occurred after the Ku Klux Klan, KKK, applied to sponsor a one-mile section of Route 515, located close to the Appalachian Mountains.  The KKK is an organization that pushes “White Power” in attempts to separate whites and blacks because of ethnicity.  Route 515 is the place with thick history of the activities that the group has practiced.  There the Ku Klux Klan would torture and kill the Blacks over race.

Many Whites at the time believed that Blacks were ignorant, usually referring to them as primitive monkeys and they shouldn’t be  allowed to live amongst the “pure”.  The KKK was organized to discriminate against, dehumanize and murder human beings.  And for that, I cannot let it get by.

Civil Rights leaders have asked the Georgia Department of Transportation to deny the group permission, but if it goes to court, they may be forced to let the KKK proceed — or be forced to shut the program down.

A similar case happened back in 2005 that sheds light on the Ku Klux Klan’s case.  Back in 2005, the Missouri Department of Transportation lost a case in the U.S. Supreme Court after denying another chapter of the Ku Klux Klan’s application.  The KKK yielded help from the American Civil Liberties Union to argue before the Court that the First Amendment stops the program from denying an application because they disagree with the organization’s “political agenda.”

To make it better, the cyclops of the KKK’s Realm of Georgia, Harley Hanson, said, “We just want to clean up the doggone road.  We’re not going to be out there in robes.”  Although, I do believe in the quote “To each is own”, I would have to agree with the Department of Transportation’s decision to deny the application.  Not because I don’t believe that they will “clean” up the roads (you can take that in whatever context you’d like), but because of their history.  There could be plans that are not being openly stated.  I’m certain that supporting an organization like that would be disrespect to the Black community as a whole.

Furthermore, opponents have made it clear that if you allow the KKK to sponsor the highway — and in result will include permission to erect signs advertising their work — would be a HUGE setback on a state that has come so far since the civil rights era.  Tyrone Brooks, head of the Georgia Association of Black Elected Officials, have asked the Department of Transportation to deny the KKK’s application.  He adds, “They have to say no.  If it brings a lawsuit, so be it.  If it ends the program, so be it.”

Brooks have revealed that the KKK’s volunteer work is an attempt to publicly rebrand their name and grow their membership.   He said, “By accepting the application, the state would be ‘complicit’ in the activities of the KKK as a ‘domestic’ terrorist group’. ”

I have made it clear where I stand.  Are you confident enough to voice your opinion about the situation?  Do you agree or disagree?  Why?
Leave your comments/feedback below!  I’d love to hear from you all.