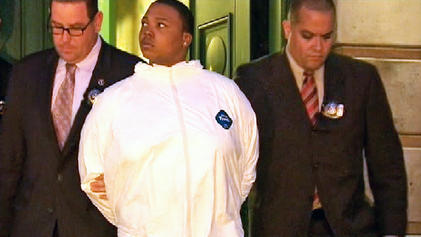 A clearly deranged Bahsid McLean, 23, was recently taken into custody for the gruesome murder of his mother 45 year old mother Tanya Byrd. According to The New York Post, McLean allegedly chopped off his mother’s head and hacked up the rest of her body with the help of a friend. The cherry on top of this mess, is that McLean actually took a picture of himself holding his mother’s decapitated head and smiling.

According to The NY Post, details of her death include a “brutal bedroom stabbing,  blood drained in the bathroom, and the body being hacked with a brand-new power saw”. Her remains were wrapped up in plastic, some were stored in luggage and thrown out with the local trash that went to several locations.

The NY Post reported that Byrd was the mother of two additional children and worked as a home health aide.  Authorities believe she was killed early Sunday or Monday morning. Her remains were found by a father and son walking their dog. Authorities say they found the murder weapons in McLean and his accomplice’s home.

“McLean was charged last night with second-degree murder, police said. Both men were charged with hindering prosecution and unlawful dissection of a human body. They blamed each other for Byrd’s death”.

While there is no justification for something like this, The NY Post reported that cops said McLean killed his mother because she “wanted him to grow up and move out and be a man.” WOW.

This is a terrible crime and shouldn’t be made light of, but as I’ve stated many times before, it’s exactly why mental health is so important. Chopping up your mother because she wanted you to do what every young man has to do in order to grow up, is not the normal type of response from a child upset with their parent. This type of action involves deep, rooted mental illness that should have been treated years ago. Plus, posing for a photo with your mother’s severed head and smiling shows no remorse and that your mind has most likely completely snapped. If caught early and treated properly, prayerfully, we should be able to help prevent these types of outcomes.