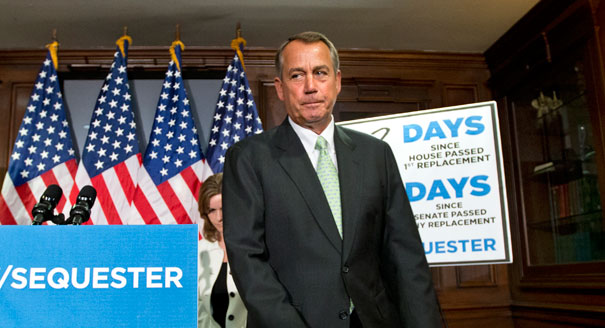 In two days, the major nation wide budget cut aka the sequester, is set to take place, so if the big shots in charge of running our country are planning to stop it, they better do it fast, like now.  If the sequester does go into effect March 1 as planned, it would mean over a trillion dollars in budget cuts.

However, those potentially affected by it will have at least a month to prepare for the worst. According to Fox News, even though the sequester would officially take place in two days, federal law says that workers must get at least a 30 day notice before lay-offs begin meaning that “the radical staffing cuts that are stoking the panic won’t materialize until April”.

Republican Speaker John Boehner is particular upset about this and pretty much blames President Obama for it happening. Boehner and his party have been trying to resolve the problem their own way and on Tuesday Boehner stated that they would not make any more actions or plans until the “Senate gets off their ass and begins to do something”.

According to The Huffington Post, Boehner said that the House has already passed to bills as an alternative to the sequester but the Democratic party did not fully come to terms with them. “We have moved a bill in the House twice. We should not have to move a third bill before the Senate gets off their ass and begins to do something,” Boehner added.

Below is an excerpt of what Boehner said on Tuesday regarding the sequester. As reported by The Huffington Post:

The president has known for 16 months that this sequester was looming out there when the super committee failed to come to an agreement, Boehner told reporters on Capitol Hill. And so for 16 months, the president has been traveling all over the country holding rallies instead of sitting down with Senate leaders in order to try to forge an agreement over there in order to move a bill.

Obama was in Newport News, Virgina that same day to also discuss the sequester. Boehner continued his blame game by saying that the president only went to Virgina “to use our military men and women as a prop.”

What do you think about the sequester? Is it as bad as it seems?