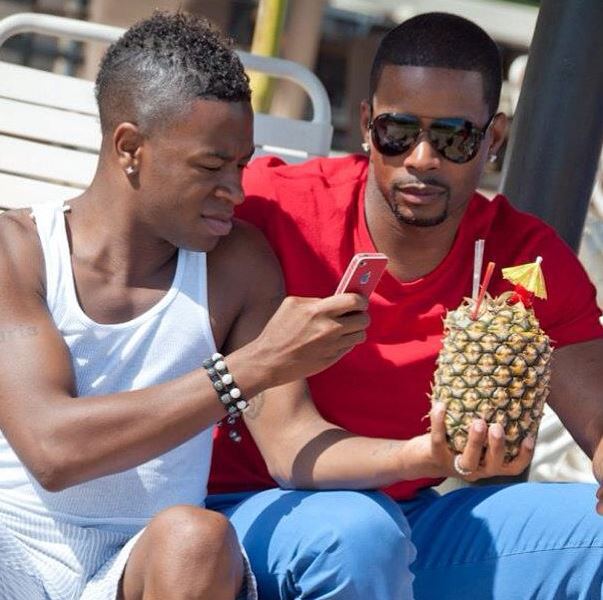 Does the NFL have a “DON’T ASK DON’T TELL” Policy?  It never ceases to amaze me at how people gain pleasure from exposing others. Reality TV is a prime example of how the media exploits and shines the spot light on individuals and the public eats it up like chocolate cake. Many players agree that they or their team mates would not be accepted by their fans if they were openly gay and because of this, gay rights organizations are pressuring professional players to be advocates for gay rights.  But many are afraid to come forward.  According to the Bossip interview between Kerry Rhodes ex-lover, Russell “Hollywood” Simpson, once the you know what hit the fan, Rhodes was worried what other people would think and was trying to “protect his free agency”.  Can you blame him?

Here are some highlights from the interview according to Bossip.

Did you benefit because of this relationship? What gifts did Kerry buy you any special gifts?

Kerry paid for everything. We had a very good life together. I always got any and everything I ever asked for. Vacations, red bottoms, the private jet in my video was us going to training camp together. I had a driver and he even gave me his Aston Martin. He later bought me my own car and because I’m not a dumb bi**h I made sure to get it my own name and he paid the whole thing off! He treated me very well. I will never talk bad about him in that way because he was really good to me.

It’s funny how homosexuality is often publicly accepted by many people  but only with certain stipulations (you have to be in Hollywood, can’t be a gay jock, have to girly not burly, and it’s way too overwhelming to have gay men play for our favorite sports teams). Because of this, many people like Kerry choose to be on the DL. The problem with this is that it can backfire at a moment’s notice. The DL person may get into a relationship with a veteran gay community member who knows what they want and things may be good for a while but as soon as somebody suspects, they deny, deny, deny which leaves the other person angry, confused and likely to spill the beans out of spite.

Having your dirty laundry aired for everyone to see and being rejected are never the best times in anyone’s life. Maybe you’re thinking, he’s gay so what? Just accept it and move on, but the truth is that we may be able to accept it before he does. According to Health AM, during a study, 10 percent of males who had only had sex with other males within a year’s time, claimed they were “straight” and of the “337 survey respondents who’d had sex with another man, almost 73 percent still identified themselves as straight”.

Here are some questions to ask yourself

After listening to the interview above, let me know what your thoughts are.