Race relations are a sensitive topic in society and as of late, it seems that every one of every race has an opinion to share. The highly publicized George Zimmerman trail where he was found not guilty in the death of unarmed teenager Trayvon Martin, got people talking about race issues that were often ignored, overlooked and accepted. For example, being racially profiled in high end stores is something many black people just accept. In fact, Oprah Winfrey recently shared an experience where she was profiled in a store and when she asked to see a handbag, the sales associate told her that she “didn’t want to hurt her feelings because it was really expensive”. We all know that Oprah can buy, sell and or trade that handbag without even putting a dent in her pocket book.

Quest Love of The Roots wrote a letter explaining his experience with racism and even President Barack Obama publicly spoke about the plight of the African American man, but not much has been more controversial than when CNN Reporter Don Lemon wrote what he thinks is a 5 Point Plan to “fix our communities”.

Point 1: Stop having children out of wedlock. “Just because you can have a baby doesn’t mean you should,” he said. “Especially without planning for one or getting married first.”

Point 3: Respect where you live. “Start small by not dropping trash, littering in your own communities,” Lemon suggested.

Point 4: Stop using the n-word. “I understand poetic license, but consider this: I hosted a special on the n-word, suggesting that black people stop using it and that entertainers stop deluding yourselves or themselves and others that you’re somehow taking the word back,” he said.

Point 5: Pull up your pants. “If you are sagging, I think it’s your self-esteem and who you are as a person that’s sagging,” he said.

While there is some truth in what Lemon said, it’s going to take a lot more than his suggestions to “fix” the problem with racism in America.

This list rubbed Def Jam cofounder and hip hop icon Russell Simmons the wrong way and he decided to reach out to Lemon and challenge his list. The open letter circulated around social media and eventually found its way to Lemon who said he wasn’t even going to respond initially. Simmons took to twitter to call Lemon a series of choice and insulting words, but in the letter kept it cordial, for the most part. After almost two weeks of silence, Lemon used the “No Talking Points” segment of his show to address Simmons. Lemon kept it professional, yet stood his ground. He responded to each point Simmons brought up and even admitted to being “glad” that Simmons wrote the letter. So are you team Simmons or team Lemon? Read Simmons’ letter to Lemon: http://atlantablackstar.com/2013/08/11/don-lemons-open-letter-to-russell-simmons/ and watch the above video to get Don Lemon’s response. 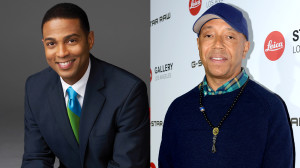