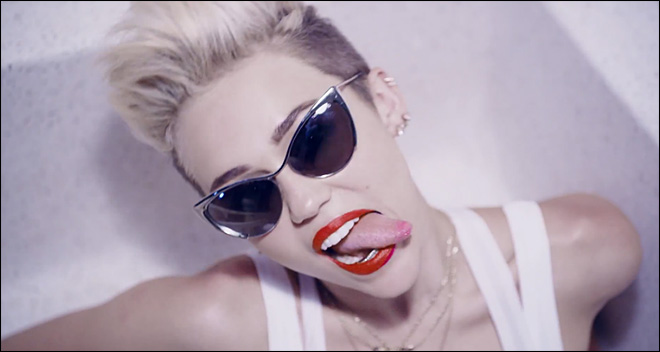 Just in case you thought Miley Cyrus and her twerking ways have gotten a bit too ratchet, she wants to clear the air. Miley Cyrus Addresses being called white ratchet! What you see is not necessarily what you get, well kind of: “people have this misconception of me that I’m just one of these kids on TV and that now I go off and party and I’m just this ratchet white girl, and I’m not. I work really hard; I’m just in a different environment I’m originally from.” Many people compare Taylor Swift and Miley Cyrus as the girl next door versus the wild daddy’s girl. However, Taylor has had more boyfriend’s than Miley has had any day. Also, many say it’s because they feel her father kept her caged in all her life that now she is free she is in other words wild’n out. Bu think of her father back in his youth he was a bit of a partier in his own right.

She adds, “I was thinking about dropping the Cyrus and just being Miley, but there’s something powerful about the fact that my name now is like a household name.” Do some parents experience over parenting? Yes 5 ways for a parent to have control but not too much are as listed …

1. Teach your kids problem solving skills. Instead of conditioning our young people to “depend on parents” to fix what’s wrong, why not cultivate a “problem-solving bias” in them, to understand and resolve their problems
2. 2. Discuss the art of negotiation. Much of life is about negotiating conflict with others and resolving it with a win/win solution or a compromise.
3. Build emotional intelligence in your kids EQ, not IQ, is the greatest predictor of success for young people, both as students and later as graduates. Emotional intelligence enables a person to be self-aware; to manage their own emotions; to be socially aware and to manage relationships.
4. Help them set and manage expectations. I believe that much of life is about setting and managing healthy, realistic expectations.
5. Don’t do it for them. Whatever you do, as your kids grow older, move from “doing it for them” to “helping them learn to do it themselves.”

As we get older we must understand that our children will too yes sometimes we want them to stay our little babies but at the same time we have to prepare them for the future. Don’t give them a fish; teach them to fish.