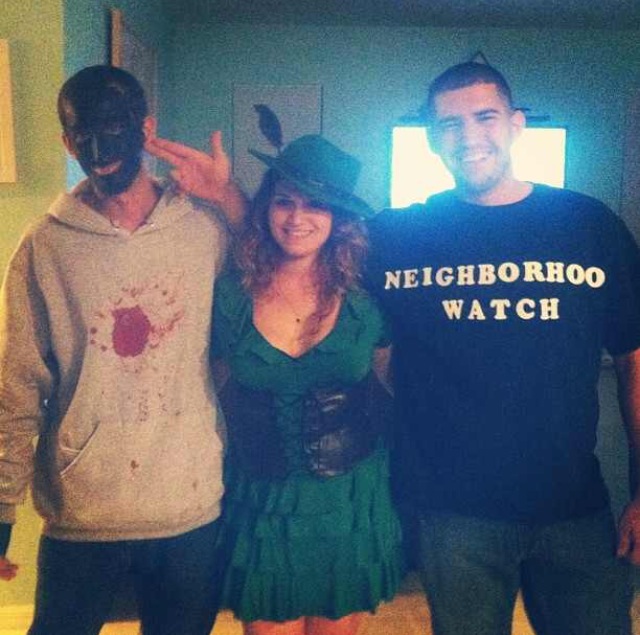 Halloween is the one holiday where women can dress as the sluttiest of sluts, men can act like the biggest of fools and on November 1st, all is forgiven. The costumes are supposed to show your individuality, express your admiration for your favorite super hero or just allow you to be creative. But, at what point does your “creative” costume just go too far?

Recently posted on the photo sharing app, Instagram, a costume that was supposed to be a joke is causing a lot of controversy (Trayvon Martin Costume). The picture shows three Caucasian young adults; two males and one female. One of the men is wearing a sweatshirt with the words “neighborhood watch” printed on it and the other is in complete blackface wearing a hoodie with a red stain on the front, symbolizing blood. The duo is tastelessly dressed as Trayvon Martin and George Zimmerman.

This costume is offensive on a number of levels. First of all, blackface. In 2013, who still thinks this is okay?! Long story short, blackface is ALWAYS a bad idea. Secondly, the death of unarmed Martin and the Zimmerman case, trial and verdict divided the nation and to make light of it is offensive within itself. Lastly, to make a mockery of the death of a teenage is classless and insensitive.

The thing that doesn’t sit well with me is that the user posted several variations of the photos which shows that she genuinely saw nothing wrong with the costume and proudly supported her friends wearing them. Within moments of posting the photos on the site, the user began receiving negative comments. The pictures went viral and began to show up on other sites like Facebook and Twitter.

My question is, if this is supposed to be funny, exactly who is laughing?