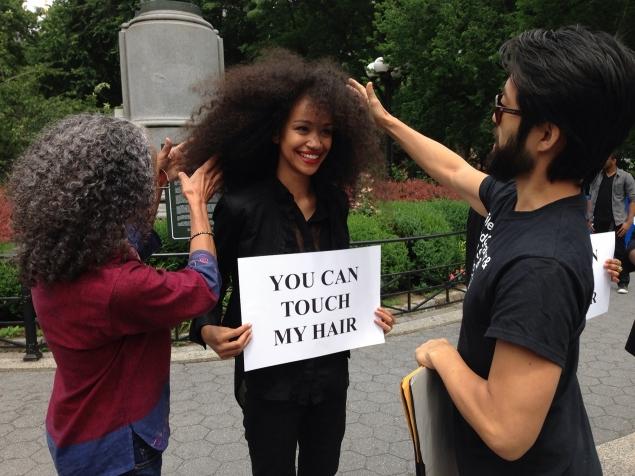 I know we just celebrated Black History month, but this is still a relevant topic. Have you ever had someone come up to you and ask “Can I touch your hair”? Number one, its a creepy question to be asked from a complete stranger and two, it’s asked like the hair is  some mystic being from another planet waiting to be examined. Que the awkward moment!

Black people in general have a variety of hair textures. Unlike other ethnic backgrounds, where one type of hair is dominant, Black hair could be anything from kinky to soft and wavy, it really just depends on the person’s genetic make-up. Many of those a part of the Black community know that more often then not, White and other races are notorious for questioning what and how hair grows out of a Black person’s scalp.

Is there a double standard here? You don’t hear society taking too much notice in people asking White individuals if they’re hair is naturally blonde or if they have hair extensions, so why such curiosity with Black hair? Is it the versatility or just the fact that it varies in textures like the color of Black skin, which we all are too familiar with the past and current struggles in that area of Black history.

A woman in the video made a valid point of how asking to or even worse assuming it’s okay to touch woman’s hair as being the same thing as touching a females rear end without permission; both of which could get you punched in the face according to her. I see her point.

If you’re a person of color reading this post, would you be or do you become offended when someone asks to touch your hair? If you’re one of those individuals who are overly curious about Black hair, why do you find it so interesting?