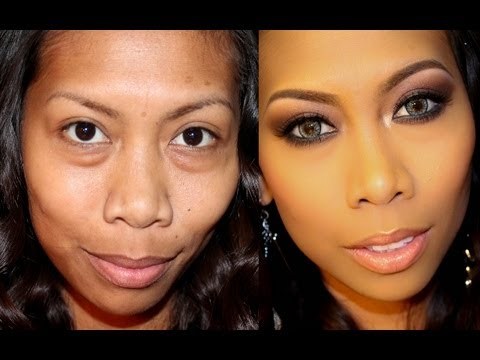 One of the great things about living in America is that probably 95% percent or more of the population is concerned with their appearance to at least some degree and because of this, consumer needs vary from weaves to lipo! We all have those physical traits that we dislike and do our best to conceal or camouflage. Maybe you wear heavy foundation to cover up acne. Maybe you tell the barber to give you a low, low fade to blend in a receding hair line or maybe you like to enhance certain areas of your body for viewing pleasure. To each his own, but when is it appropriate to come clean about such things?

I know the guys will agree with us on this one. Ever heard of “make-up sorcery”? You know, when make actually physically transforms a person after applying it? No wonder it’s a phenomenon among the female gender. Anyway, when it comes to making a love connection, attraction is pretty high up on the scale, so imagine if what he or she is attracted to isn’t really you? It’s fine during the “getting to know you stage” but if things go well and you two become a couple, when is the right time to let him know that you’re a gal with a mustache, you don’t really have green eyes or that you wear lifts in your shoes to appear taller to women? A few weeks? A month or longer?

We here at AskDrO want to know, when do you reveal what’s real vs. what’s fake to someone you’re in a relationship with?

A. Immediately. It’s best to be upfront and honest from the beginning

B. After about a month or so of dating

C. Only if he/she asks

D. Let them find out themselves and then you give explanation