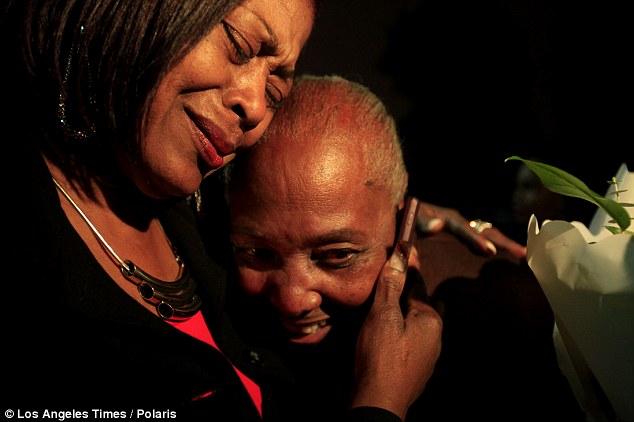 A grandmother was in jail for 3 decades for a crime that her boyfriend committed, unbelievable. She was forced to drive to the scene of the crime but was not an active participate.  Yes, she did flee from the crime site for fear of her own life. How would you respond or feel if this happened to your biological grandmother?   I would imagine just devastated. No birthdays, graduations or family reunions for 30 long and lonely years as a result of a crime that it could have be easily proven that she did not commit. This is another example of justice in America.

Ms. Mary Virginia Jones has been in prison in Los Angeles for 32 years. Back in 1981, her boyfriend was in a drug deal gone bad. As a result, he shot and killed 2 men. Ms.Jones was forced to drive and was subsequently charged with 2 count of First Degree Murder. So as the story would go,  she was sentenced to “Life Without Payroll.” However, there is a God somewhere.  One of her daughters sought of help for this gross social injustice.

There USC Gould School of Law took on her case. They said that if the jury had possibly heard testimony from experts on “Battered Women Syndrome” this injustice most probably would have never happened. What do you think? They went to the LA County District Attorney and had the case re-opened and over-turned as a result of the diligent work of her team.  Her charges were reduced to Voluntary Manslaughter and she has served more than enough years for this level of conviction.

Prior to her arrest she was the mother of two children. She worked in the LA School District as a Teacher’s Aide. She also lead a pretty normal life, except for being in an abusive relationship. She was an avid church goer but just wanted to be loved by the wrong type of man. Mose Willis shot both men and was convicted and placed on death row where he later died. She was still in for the long haul.

What do you do when you have limited funds and are faced with such a series crime as Ms.Jones? Is America better equipped to deal with matters, such as this, and will justice prevail when all factors are properly weighed in your opinion? Do you know of anyone who is in  jail now for a crime that they “possibly” did not commit? Do you have any relatives, currently incarcerated and serving long sentences because they did not have the proper representation in court?

Is America A place of justice or just quick sentences for the poor? Let me hear from you.