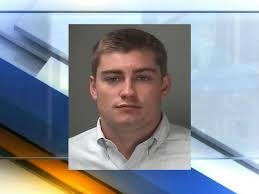 Remember the Brock Turner case? This time its another frat student, but multiple charges! John Enochs, a 22-year-old former IU student and Chicago native, has been found guilty of two rape charges that occurred within the past two years. He was granted a plea deal to serve one-year probation after only spending one day in jail.

On Thursday, Enochs’ lawyers told him if he plead guilty to battery, his rape charges would be dropped. As he listened, prosecutors dropped the rape charges which are punishable by up to 20 years. The victim expressed how she could not make out her attacker but repeatedly screamed no and stop. Footage of Enoch entering the room with the female 20 minutes before she left out alone was also used in the case. She suffered from deep cuts and bruises as a result of the attack and Enochs’ DNA was found inside of her.

Enoch was allegedly guilty of raping another woman over a year ago but the details of the incident have not emerged. It happened in 2013 when a woman initially decided not to press charges but decided to come forward in light of this recent accusation. Prosecutors claim there wasn’t enough evidence to convict him on both charges because each woman couldn’t recall critical details due to intoxication.

So you allow him to plea guilty to a misdemeanor?

Both women are currently suing IU and exposing their carelessness in treating sexual assault cases.

This case, along with the Brock Turner case, has female students and parents sick across the country. Not only are our female students in danger, they don’t have a sensible legal system to advocate for their justice.

IT IS NOT OK FOR MALE STUDENTS TO IGNORE NO BECAUSE HE AND SHE ARE DRUNK!

IT IS NOT OK TO FURTHER SEND THE MESSAGE THAT MEN WHO DO WRONG THINGS DO NOT HAVE TO BE HELD ACCOUNTABLE!

This case brings up a series of much-needed to be asked questions.

Guys we want to hear your feedback on this? How can we work together to fix theses political loopholes so that justice is served?