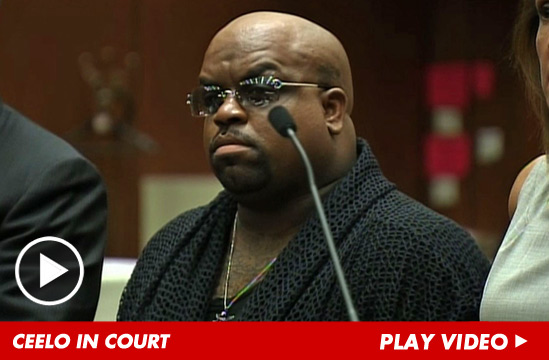 Woman says, “Cee Lo Green gave me ecstacy.” Allegedly, law enforcement sources say, authorities had problems with the woman’s story. One of which was that the young lady and Cee Lo had been dating for months. She told cops the star of “the voice” slipped extacy in her drink and next thing she knew she was naked in his bed. An investigation was opened, and prosecutors ultimately declined to charge the singer with sexual assault due to insufficient evidence. As for the drug charge, law enforcement sources say Cee Lo will be charged with 1 count of furnishing ecstasy. A felony and he may be arraigned as early as this afternoon. Allegedly, the woman claimed to have a tape recording of Cee Lo talking about the incident. Although our sources say Cee Lo never said anything about slipping ecstasy in her drink, he did reference the drug.

It appears the D.A. views the tape as a confession to drug use thus the charge. We’re told the criminal complaint will not allege the singer had any criminal intent to harm the woman when he allegedly shared ecstasy with her. Although our sources say Cee Lo never said anything about slipping ecstasy in her drink, he did reference the drug. As for punishment … we’re told most people with such a first offense get probation. Is this just another desperate woman attempt at 15 minutes of fame or a scheme to get his money? Or is she really telling the truth about the whole situation. Truth is like it was reported there is just not enough evidence on her end showing that the singer did in fact drug her. Will this sticky situation mess up Cee Lo Green’s image as a entertainer. More than likely, not because his fans love him for his talent.