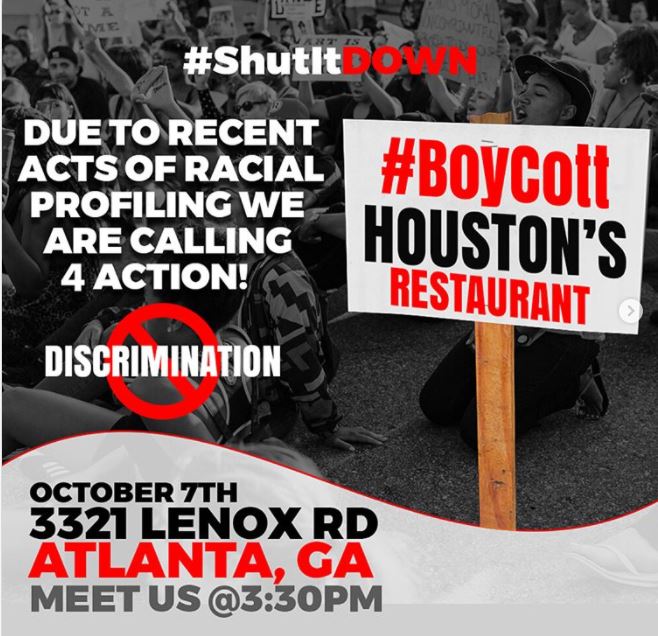 Whoever thought Social Media was just for posting pictures or telling followers how you are feeling today,or what reality show has you in your feelings might be surprised to know that its ability to bring awareness to social injustice is just as relevant.

Over the weekend controversy struck in Atlanta when protestors gathered in front of Houston’s Restaurant on Lenox Road due to accusations of discrimination.  The protest stemmed from an Instagram post made by Ernestine Johnson (actress, performance poet, and event host) stating that she felt discriminated against when she arrived at the restaurant with a party of seven and was denied seating.

Johnson took to social media stating “We had a party of 7 and were told they do not seat more than 6.  We said fine we will seat 4 and 3 at separate tables.  They said we don’t split tables. I said we aren’t asking you to split tables we are separating ourselves and we are completely fine with different checks and different sections.  They said no and still refused us! When asked why they had no sound reason.  I felt completely disrespected at a business that I have been patronizing for years! Has anyone else ever felt discriminated against at this business?”

Apparently, others have felt that same discrimination. On this past Saturday a group was organized to boycott the restaurant and people showed up in droves.  The restaurant was closed in anticipation of the boycott.

Houston’s Restaurant also took to social media to defend their action and their brand. In an Instagram post Houston’s stated:

“We have employed a diverse, hard-working staff serving Atlanta’s similarly diverse clientele for many years. Charges of discrimination are not only unfounded but are are an intentional manipulation using social media. Our policies and guidelines apply equally to everyone. Our restaurants are not setup to accommodate large parties together.  Our Houston’s in Atlanta recently instituted a policy whereby large parties of 7 or more will not be split into separate groups at different tables, which means that larger groups may not be able to dine with us at certain times.  We decided to close our Lenox Houston’s today from the anticipation of protest and threats made against the restaurant and staff members.  We will always choose the side of caution when it comes to protecting our valued staff and guests.”

In the mix of all the social media hype were Atlanta natives and Hip Hop heavyweights T.I. and Killer Mike.  T.I. while present at the boycott took to IG and posted the following: Sorry they closed ma’am.  No spinach dip today!!! #ShutItDown #HoustonsWeHaveAProblem #BoycottHoustons #UsorElse. Check out more on BOSSIP click here:  https://bossip.com/1591213/sunken-spinach-dip-houstons-has-a-problem-protest-led-by-t-i-shuts-down-atl-eatery/

While Killer Mike posted: “Houston’s is a restaurant that is supported by the black dollar in Atlanta and supported by the entertainment dollar especially.  I just call on entertainers and other members of Atlanta who are for justice and right—black or white—and black Atlanta in particular.  Not only boycott Houston’s but find a black restaurant to support or one that treats your community well.  Me personally, I haven’t been to Houston’s in three or four years.”

While Social Media seems to be the “New Normal” when it comes to getting all the latest information regarding gossip, tragedy, or controversy it also seems to be the quickest way to get people’s attention and call them to action.