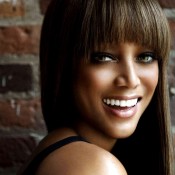 Tyra Banks has proved that beauty and brains can indeed come in one package! The 5’10” superstar is now attending Harvard Business school’s Owner/President Management Program. Featured as the first African American model on the cover of Sports Illustrated magazine, Tyra’s never been afraid to challenge the public’s expectations or standards.

Tyra explained her academic endeavor in a recent interview with MTV News.

“I started last summer and I didn’t really talk about it. It was very incognito, my name and everything, but I decided to talk about it [now]. I think it’s a positive thing, especially for girls to see that you can still continue to educate yourself and you can still be fabulous and fierce and celebrate your femininity.”

What is just as surprising as her latest undertaking is the fact that the media-mogul is residing in the university’s standard dorms. On Jimmy Falon’s Late Night,  Ms. Banks revealed that, “It’s mandatory dorms. I freaked out at the beginning… now I wouldn’t have it any other way.”

Tyra’s record-making modeling career, Emmy Award-winning talk show and successful television series America’s Next Top Model—now in its 15th season, hasn’t stopped her from making her mark in what she believes is her life mission, “to expand the definition of beauty – EVERY kind of beauty!” Thus, it only makes sense that Harvard will aid her efforts to use the “Tyra Empire” as a vehicle to make this change.

“I think I could’ve leaned on all of my advisers. I have accountants, and lawyers, and investment bankers. But I don’t want to be that girl when I’m meeting with them, where I’m like, ‘Uh-huh, great.’ I now can say what’s the net present value on that? What’s the discounted cash flows of that? And that’s because of Harvard.”

Tyra further tells CBS news that Harvard is going to help her revolutionize the influence of media on young women, “In order for my company to grow and be the best, and to reach these women, and to serve them, I needed the best. So I went to the best.”

Meanwhile, Tyra has recently launched a website, TypeF that customizes all the fashion, beauty and related content that is viewable to each registered visitor. Thus, a beautiful, full-figured African American female will be exposed to images of women that resemble her physical traits—instead of a stick-thin, blue-eyed blonde.

I applaud Tyra for venturing out and trying something NEW! Never be afraid to tackle your different dreams, at any stage of your life.
What do you think of Tyra’s latest pursuit?