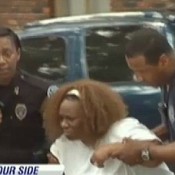 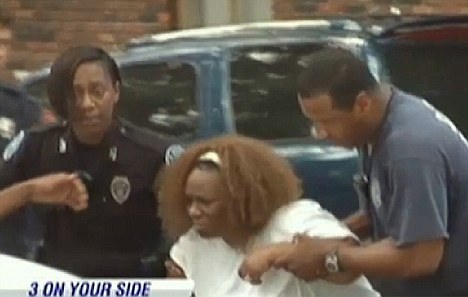 Betty walker being comforted by police.

A woman is mourning the death of her husband after she mistakenly shot him dead.

Robert Walker, 53 picked up an 8-month-old Pit Bull puppy that was trying to attack a group of children, while his wife, Betty Walker went to retrieve a gun.

In a freak accident, Walker fired two shots – one hitting the dog in the leg and another fatally shooting her husband.

Mr. and Mrs. Walker of Houston, Texas were visiting their son Robert Walker Jr. and grandchildren at his South Jackson, Mississippi home.

Jackson police spokesman Colendula Green his death appears to have been accidental,

‘The dog was trying to attack the kids in the neighbourhood and at that time, the wife did shoot at the dog but instead shot her husband in the chest area.”

A Hinds County grand jury will decide whether to charge Mrs Walker. 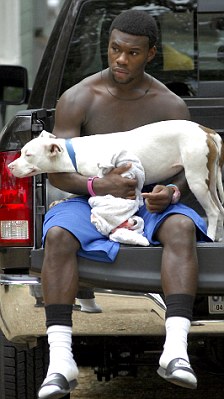 Animal control officials have taken custody of the animal, named Cocaine.
Its owner, Lazarius Montgomery who lives two doors down from Mr Walker Jr, could face charges.
My condolences to the family.

Do you think Mrs. Walker should be tried for her husband’s death?