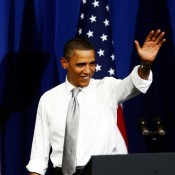 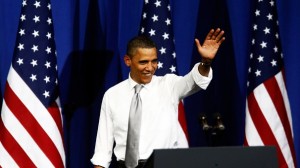 President Barack Obama held a 50th birthday celebration in his home city of Chicago Aug 3. If you missed the gala don’t feel bad, VIP tickets will cost up to $35,800 per couple.

The bash was used to raise money for the Obama 2012 campaign and held at Chicago’s revered Aragon ballroom.

Casey Gane-McCalla, from NewsOne put together this list of 50 little know facts about President Obama:

1. He and Bill Cosby are the only people to ever get free food from Ben’s Chili Bowl.

2. He ate dog meat, snake meat, and roasted grasshopper when he lived in Indonesia.

3. He says his favorite children’s book is “Where the Wild Things Are.”

4. He owns a pair of boxing gloves signed by Muhammad Ali.

5. He collects Spider-Man and Conan the Barbarian comics.

6. He worked in a Baskin-Robbins ice cream shop as a teenager.

8. He majored in Political Science at Columbia University.

9. His father grew up herding goats.

11. He used the n-word in his audio book “Dreams From My Father.”

13. He was an avid reader of the “Autobiography Of Malcolm X.”

15. His first date with wife, Michelle Obama, was the movie “Do The Right Thing.”

16. He kept a pet ape called Tata while in Indonesia.

17. He applied to appear in a Black pin-up calendar while at Harvard, but was rejected by the all-female committee.

18. His favorite book is “Moby-Dick” by Herman Melville

19. His favorite movie is the “Godfather.”

20. His high school yearbook picture inscription thanks “Tut,” “Gramps,” and the “Choom Gang.” Choom is Hawaiian slang for “pot smoking.”

21. He has seven half-brothers and sisters in Kenya from his father’s other marriages.

22. He did a good imitation of Jesse Jackson while he was at Harvard.

24. He won a Grammy for his audio book “Dreams From My Father.”

25. He has read every Harry Potter book.

26. He was called Barry until he became known as Barack in college.

27. He was in the Columbia Black Student Union.

29. His favorite artist is Pablo Picasso.

31. His name means blessed by God in Swahili.

32. He was the 5th African-American to serve in the U.S. Senate.

33. He enjoys rap artists The Fugees and Jay-Z.

35. He says he would’ve been an architect if he wasn’t a politician.

36. He was on the Hawaii high school state basketball champion team.

37. He was mentored by Harvard Professor Charles Ogletree who was also the lawyer for rappers Tupac and Shyne.

39. His favorite president is Abraham Lincoln.

40. He traveled to Kenya in 1988 and met many of his paternal relatives.

42. His paternal grandfather was affiliated with the Kenyan revolutionary Mau Mau movement.

44. Some of his maternal ancestors were slave owners.

45. He moved to Chicago and worked as a director of the Developing Communities Project after college.

49. His first public speech was at Occidental College, calling for the school to disinvest from apartheid South Africa.