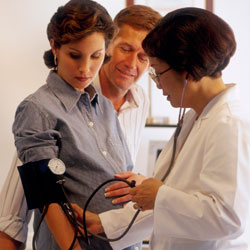 Starting a family later on in life is becoming more and more popular as time progresses. According to WebMD, “from 2008 to 2009, the birth rate for women ages 40 to 44 increased by 3%, to 10.1 births per 1,000 women. That is the highest reported since 1967 for that age bracket”. Not only are the average Joe’s having babies at 40 and above but the rich and famous are as well. Mariah Carey gave birth for the first time to twins at age 41. Halle Berry gave birth to her first child at 42, (and is pregnant with her second child now) and John Travolta’s wife, actress Kelly Preston, had her third child at age 48!

There’s nothing wrong with having kids later in life. Some people prefer to wait until their careers have taken off and are better able to support a child. Some people may not be sure if they actually want children and therefore wait a long time before conceiving and some people just aren’t able to have children and/or have complications with pregnancy which leads to to them possibly giving birth later than they expected. You can’t blame someone for wanting to have a family no matter how old they are but it has been proven that older women who become pregnant are subject to more complications during pregnancy and risks than younger pregnant women.

However, there is some good news for those that still want to have children past 40. A study on WebMD  reported that a healthy weight will potentially decrease your risks of having a baby at age 40 or above.

As reported by WebMD:

“If you are healthy, over 40, and not obese, your risks of pregnancy complications are certainly less than an obese 40-year-old,” says researcher John R. Barton, MD, director of maternal-fetal medicine at Central Baptist Hospital in Lexington, Ky. “And [they are] not that much different, other than a higher C-section rate, than a non-obese, younger woman.”

That’s good news! So if you’re 40 or above and thinking about becoming pregnant, remember to keep a healthy diet and exercise in order to get the best possible outcome for you and your potential baby.