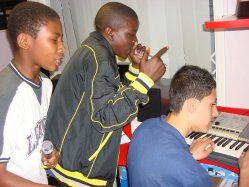 I honestly worry about this generation sometimes. Jay Harris has dreams of becoming the next overnight rap sensation and therefore opted out of his college education opportunity.  I’m not one to crush anyone’s dreams but if you were an elite high school football player who got offered to play college ball with scholarship money, wouldn’t you at least try it out? This Jay kid kind sort of turned down/ got his offer snatched back by the school after they reviewed his Youtube videos featuring him rapping explicitly. By the way, this kid cannot rap. His beat is whack, his flow is off and his lyrics are simple and predictable. Young sir, I think it’s safe to say that you are not the next Jay Z.

According to Yahoo! Sports, Harris contacted his then future school, Michigan State, to tell his  coaches that he would not be joining the team after all. Apparently his school was already skeptical after they reviewed his material ahead of time and were ready to dismiss him anyway. “John Lewandowski, Michigan State’s associate athletic director/communications who confirmed the news”, said that the choice to not work with Harris was mutual. Michigan State thought Harris’  lyrics are “quite explicit in his raps, oftentimes smoking marijuana and mentioning drugs, women and homosexuals” ( which is really nothing out of the ordinary from any other rapper out there).

Now I know that there are plenty of people that have been successful without the aid of a college degree BUT I don’t think it was necessarily good for Harris to close his window of opportunity before he ever got to feel the breeze from it. I understand that people have to follow their dreams but I refuse to believe that every young Black males’ dream in America is to become a rapper or professional athlete (its beside my point but Harris was already on the road to one but he cut himself short lol). I’m convinced that this is a fad that has yet to blow over. Nowadays, I know everyone thinks they can just make a YouTube video, go viral and become a sensation over night but that doesn’t happen for everyone and this kid, well, I just don’t see it for him.

I think that everyone should peruse what’s in their hearts but I want the Black community to know that you don’t have to be in the music, entertainment or sports industry in order to be successful. I’m a successful Black man with my own business and practice and I’d like to think that I’m doing pretty well for myself (pats self on back). Sure, a rap career may get you on the fast tract to money but at least make sure you’re talented enough to sustain yourself especially if you’ve turned something down in place of it.

As Black people, especially our males, the odds are already stacked against us in more ways than one. America is the land of opportunity but it’s also the land filled with loop-holes, racism and corruption and a lot of times its more challenging for members of the Black community to navigate through those obstacles. With that being said, and not to imply that Harris was in need or poverty stricken but why would slap away a hand that’s extended to help and better you and your future?

I would personally choose college over a rap career any day because of the knowledge and skill sets learned there that I would and should if you’re committed to learning, obtain. If someone wants to do music that’s great but a career is not guaranteed and there’s no safety net to fall back on like the options a college degree opens up.

Anyway, that’s my take on the matter but what do you think? Should Jay Harris have taken his football scholarship or based on the video, do you think he has a successful rap career ahead?