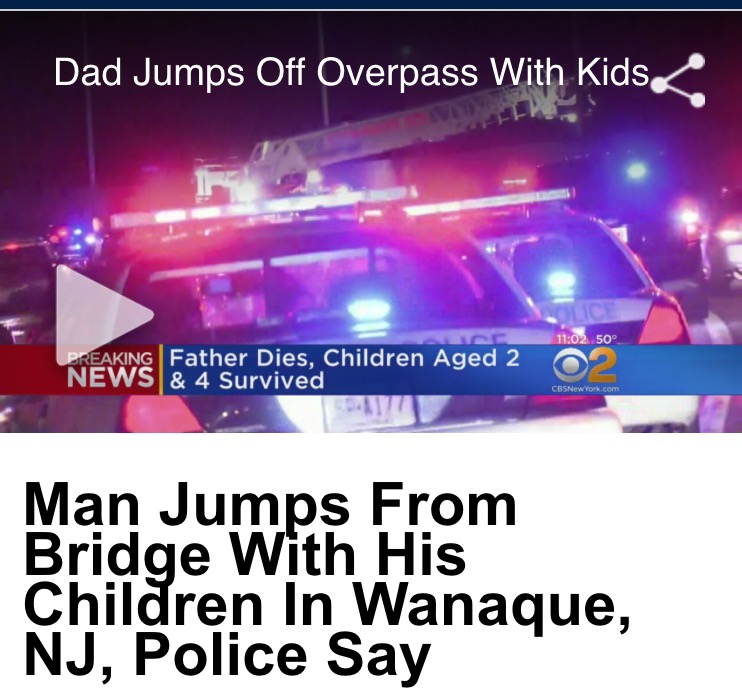 A New Jersey father of two is now dead after committing suicide by bridge jump. The man allegedly had an argument with his wife. After the heated arguments, the father took the car, put his two toddlers in it and drove off. He then jumped from a bridge holding the two children.

The father died while so fortunately the children lived. The toddles are recovering from minor injuries; none of which are life-threatening.

Sources say the father jumped from the 287 Interstate bridge over the Wanque River in North Jersey.

The hunt for the father and two children began when police responded to a phone call concerning a violent household disagreement. The wife then told the police that her husband had ran off with the kids after threatening to hurt them and himself. Police found the car by tracking down the husband’s cellular device. There they found the toddlers alive and bruised up. The father was there as well, pronouced dead at the scene.

This story, though awful and distrurbing, is remarkable. To see such strength in young siblings, to see a miracle happen. They may not understand the evil that is in the world right now, but they will have a story to tell.

I urge all mothers to find strength in protecting and cultivating their children. Strengthen your children and prepare them for emergency situations.

Love is hard and it can be a mental nightmare. We pray healing over this family and we hope rebuilding is a shorter process.