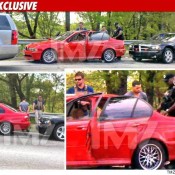 Atlanta Cops Handcuff Apollo Nida Only To Find Out They Had The Wrong Guy!

Looks like our favorite “southern belle” has a problem with Atlanta police not knowing who exactly her husband is, everybody knows that’s not acceptable! Apollo Nida, husband to Real Housewife of Atlanta Phaedra Parks was handcuffed in a case of mistaken identity.

A rep for the US Marshals tells TMZ, Apollo Nida — husband of “Housewife” Phaedra Parks — was stopped and detained outside Atlanta Thursday afternoon.

According to sources, the Georgia task force responsible for the mistake pulled Apollo over thinking he was a key player in a current investigation — but quickly released him when they realized he wasn’t the person they thought he was.

The US Marshals wouldn’t comment on the open investigation — but we’re told Apollo bears a “striking resemblance” to whoever they’re trying to track down.

Just another case of them thinking…. “we all look alike?” Or Is Apollo In Trouble Again?