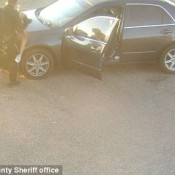 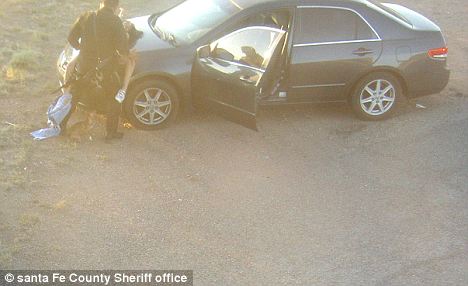 New Mexico Officer Was On Duty During Romp

One police officer took one woman’s uniform fantasy a little too far.

A decorated New Mexico state police officer may lose his badge after security cameras allegedly caught him having sex on the hood of a car while on duty, according to local reports.

In still photos from the video, the officer is seen in full uniform standing between the legs of a woman lying on the hood of a black sedan. The car is not a police vehicle.

The officer and the woman were filmed by cameras posted at a remote ranch that is owned by Santa Fe County, local news station KOB reported Monday.

It’s unclear when the two were filmed. But it appears the only witness to the rendezvous was a Chihuahua.

KOB said it obtained the video from the Santa Fe Sheriff’s office on Monday after filing a request for public records two weeks ago.

State police officials said in a statement that the officer has been put on administrative leave.

“The internal affairs investigation is complete, now we are awaiting a final decision on any disciplinary action that could be taken,” state police said in a statement.
Santa Fe County Sheriff Robert Garcia said that he would not press charges against the frisky officer and his paramour because it doesn’t appear any county laws were broken.

This cop should definitely face some type of disciplinary action since he was on duty.

What do you think? Should the cop be charged with a crime?